On Friday, the House Ethics Committee gave out the lightest admonishment to Republican Rep. Matt Gaetz of Florida for his obstructing justice tweet back in February of 2019. This was when Rep. Gaetz publicly threatened former Trump personal lawyer Michael Cohen. The statement came right before Cohen was set to testify under oath about his former boss. Rep. Gaetz followed that up by deleting the tweet and then apologizing, sort of. The ethics committee said that Rep. Gaetz did a bad thing but they believe his tweet "did not violate witness tampering and obstruction of Congress laws.”

However, the House Ethics Committee did have to investigate Gaetz’s bad behavior, and Politico reports that one of the things exposed by this whole chapter is Gaetz’s chummy relationship with Fox News’ Sean Hannity. It turns out that the Florida congressman reached out to Hannity to ask for his help concerning the tweet the day after Gaetz sent it out into public. A text exchange between Hannity and Gaetz begins with Gaetz whining: “Fuckers are coming for my law license. You were right. We all spend our time in the barrel.”

This is followed by Hannity texting back “Run this by me!!!” The three exclamation marks are Hannity’s way of showing he cares. Hannity then lets Gaetz massage his ego a little as Gaetz texts: “You’re the most powerful man in media. I don’t think you want the job of reviewing all my tweets. Your caring matters a great deal to me.” [This is me rolling my eyes and falling off my chair.] 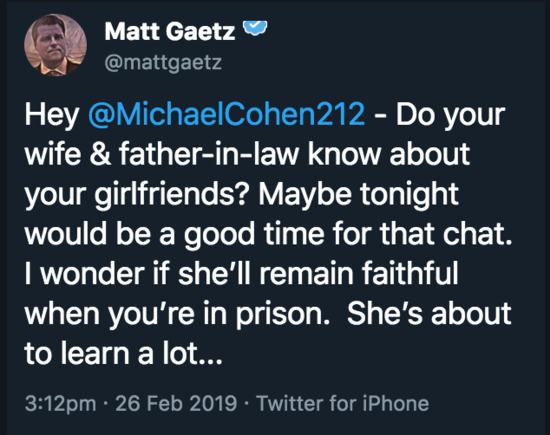 Hannity makes sure to assuage young Gaetz’s feelings by telling him not to worry, to stay low, and that people’s attention spans are “zero.” Gaetz then asks for how long he will need to stay away from the warm glow of the television cameras, to which Hannity replies that he can oil the gears of this corrupt machine, saying: “Just a while. Maybe send a note to Michael privately. I can connect u to Lanny. Or give u MC text. Just say you were upset at what was transpiring and meant it as a question, not a statement. And u would never threaten anyone. In retrospect it was poorly written and you wish u didn’t send it. That’s a CYA. Short text.” A “CYA” is short for “Cover Your Ass.” The advice Hannity is offering does open up a window into the truly sociopathic world of the right-wing political sphere.

Gaetz has a long history of theatrical, somewhat incoherent political demonstrations. The idea that he is buddied up with Hannity makes a ton of sense. Both Gaetz and Hannity are narcissists who enjoy staring vacantly into a camera and spewing whatever anger and anxiety they have about their personal shortcomings.

Subsequently Rep. Gaetz had to do a lot more apologizing, though his version of saying he was sorry was classically narcissistic in nature. Not much came of Rep. Gaetz’s attempt to obstruct justice and he has since that time felt emboldened to tweet out other racist and fascistic ideas he has in his little brain.

Not surprising. Bullies are cowards underneath. And Gaetz is too dumb for his own good.

Weird that they think Hannity is a guy to save them, though. They've really been in their bubble too long and don't have a clue how silly they're looking.

Not surprising.  Bullies are cowards underneath.  And Gaetz is too dumb for his own good.

Weird that they think Hannity is a guy to save them, though.  They've really been in their bubble too long and don't have a clue how silly they're looking.

At least Judge Pirro would be more entertaining than lying Hannity. I give the day drunk credit for still being awake when her show starts.

Posts : 9659
Join date : 2012-06-14
So Matt has an adopted, 19 year old, Cuban "son" who has been living with him for 7 years. Hope Matt keeps his distance because so many in Trumps circle have been spreading the virus. I wonder if Matt will be covering up for "Nestors" DUI's the way Matt's daddy did for him.

Posts : 6374
Join date : 2012-06-14
Location : Pensacola Beach, FL
Wondering if anything has changed since June, when it was reported that Gaetz had never actually formally adopted Nestor.

RealLindaL wrote:Wondering if anything has changed since June, when it was reported that Gaetz had never actually formally adopted Nestor.

Posts : 6374
Join date : 2012-06-14
Location : Pensacola Beach, FL
That crap about facial recognition software having recognized Antifa members among the rioters has been thoroughly and completely debunked.

Gaetz is an enormous P.O.S.

At this point hubby and I would love to move back to a blue state but (1) we're getting too old to face another complete uprooting, and (2) most of those states are either too expensive or too far north/too cold, or both.