In a rare rebuke to his bullying, Israeli Prime Minister Benjamin Netanyahu failed to stop the United States and five other world powers from reaching an agreement to constrain but not eliminate Iran’s nuclear program. Yet, Netanyahu still is dominating how the U.S. public and congressional debate is being framed, with Iran accused of regional “aggression” in four countries.

On Tuesday, a recurring theme on U.S. news broadcasts, such as Andrea Mitchell’s MSNBC program, was that any lifting of economic sanctions against Iran will give it more money to engage in trouble-making in the Middle East with references to four nations – Iraq, Syria, Lebanon and Yemen – a central theme in Netanyahu’s speech on March 3 to a joint session of the U.S. Congress.

To repeated standing ovations from U.S. senators and congressmen, Netanyahu declared: “In the Middle East, Iran now dominates four Arab capitals, Baghdad, Damascus, Beirut and Sanaa. And if Iran’s aggression is left unchecked, more will surely follow. So, at a time when many hope that Iran will join the community of nations, Iran is busy gobbling up the nations. We must all stand together to stop Iran’s march of conquest, subjugation and terror.”

Netanyahu’s reference to “Iran’s aggression,” which is now becoming a conventional-wisdom talking point in Official Washington, was curious since Iran has not invaded another country for centuries. In 1980, Saddam Hussein’s Iraq – at the urging of Saudi Arabia – invaded Iran. But Iran has not invaded any of the four countries that Netanyahu cited.

One of Netanyahu’s citations of Arab cities supposedly conquered by Iran was particularly strange: Baghdad, which is the capital of Iraq where the U.S. military invaded in 2003 to overthrow Saddam Hussein and his Sunni-dominated government, on Netanyahu’s recommendation. In other words, Iraq was conquered not by Iranian “aggression” but by U.S. aggression with the support of Israel.

After the Iraq invasion, President George W. Bush installed a Shiite-dominated government which then developed friendly ties to Iran’s Shiite government. So, whatever influence Iran has in Baghdad is the result of a U.S. invasion that Netanyahu personally encouraged.

More recently, Iran has helped the embattled Iraqi government in its struggle against the murderous Islamic State militants who seized large swaths of Iraqi territory last summer. Indeed, Iraqi officials have credited Iran with playing a crucial role in blunting the Islamic State, the terrorists whom President Barack Obama has identified as one of the top security threats facing the United States.

So, in the current Iraqi fight against the head-chopping Islamic State, Iran and the United States are on the same side. Yet, Netanyahu calls Iran’s help “aggression” – and American talking heads repeat that refrain.

Netanyahu also cited Damascus, where Iran has aided the Syrian government in its struggle against the Islamic State and Al-Qaeda’s Nusra Front. That means that Iran is assisting the internationally recognized government of Syria hold off two major terrorist organizations. By contrast, Israel and Saudi Arabia have provided direct and indirect help at least to Nusra. [See Consortiumnews.com’s “Did Money Seal Israel-Saudi Alliance?”]

The Israeli prime minister also mentioned Beirut, Lebanon, and Sanaa, Yemen, but those were rather bizarre references, too, since Lebanon is governed by a multi-ethnic arrangement that includes a number of religious and political factions. Hezbollah is one and it has close ties to Iran, but it is stretching the truth to say that Iran “dominates” Beirut or Lebanon.

Similarly, in Sanaa, the Houthis, a Shiite-related sect, have taken control of Yemen’s capital and have reportedly received some help from Iran, but the Houthis deny those reports and are clearly far from under Iranian control. The Houthis also have vowed to work with the Americans to carry on the fight against Yemen’s Al-Qaeda affiliate, which has benefitted from a brutal Saudi bombing campaign against Houthi targets, an act of real aggression that has killed hundreds of civilians and provoked a humanitarian crisis.

Indeed, Iran and these various Shiite-linked movements have been among the most effective in battling Al-Qaeda and the Islamic State, while Israel’s Saudi friends have been repeatedly linked to funding and supporting these Sunni terrorist organizations.

So, there is little truth and much exaggeration to Netanyahu’s depiction of what is going on in the Middle East. Yet, the U.S. mainstream media mindlessly reprises Netanyahu’s falsehood about Iran “gobbling up” nations. 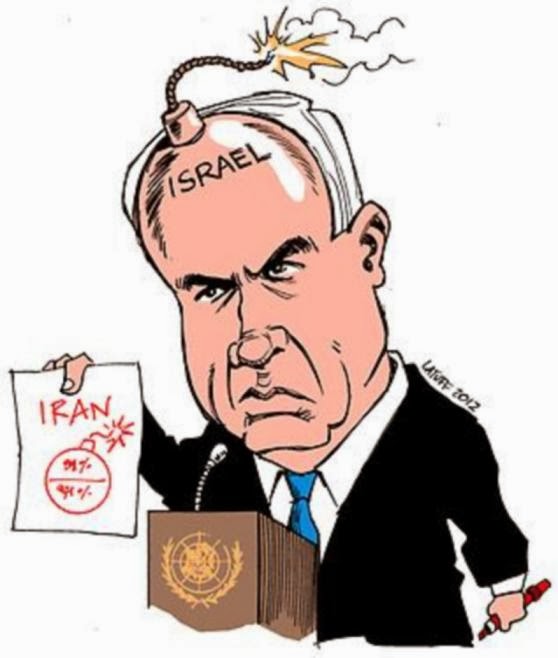 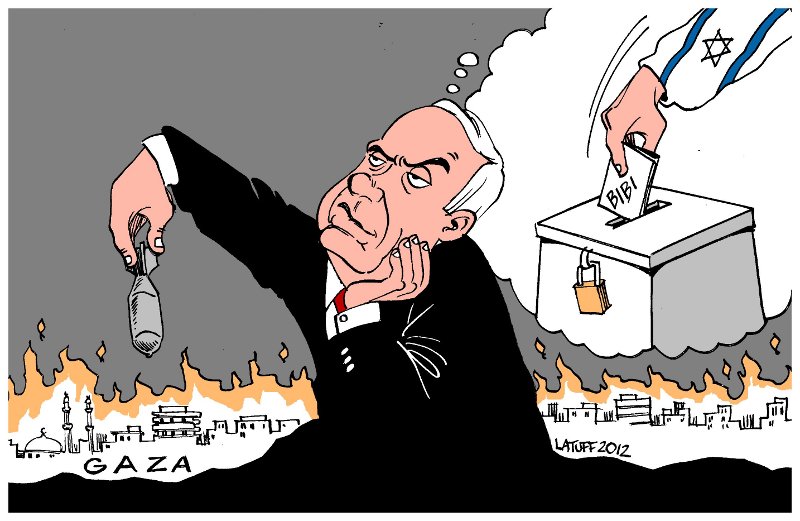 Posts : 36130
Join date : 2012-08-30
Netanyahu analogy of the inspections comparing to a meth dealer given advanced warning and flushing the meth down the toilet shows uncharacteristic Israeli lack of intelligence and a spokesperson who in simplifying to win the argument that advance notice inspections will not work actually made the argument for anybody who understands physics.  Peace works for the world.  War and chaos in the Middle East may provide a temporary buffer for the safety of Israel, but long term peace is the only answer for Israel.  The importance of what President Obama has done, is that he can show that America still can be a strong supporter of Israel, but that our interests are not lockstep and the same as Israel's interests, and that in fact our position may over time actually be the best option to protect Israel.  In the future it will be much easier for a President to act independent of the strong Israeli lobby, and for that alone, the President has done something very important.

2seaoat wrote:Netanyahu analogy of the inspections comparing to a meth dealer given advanced warning and flushing the meth down the toilet shows uncharacteristic Israeli lack of intelligence and a spokesperson who in simplifying to win the argument that advance notice inspections will not work actually made the argument for anybody who understands physics.

The rules for access to suspicious sites can be found in Section Q of the first annex to the agreement. If inspectors have concerns about undeclared sites, they must submit to Iran a request in writing that explains their concerns. Iran may counter with a proposal for “alternative means” of resolving the issue without actually allowing inspectors to inspect anything. If the inspectors and the regime can’t agree to a solution within two weeks, the dispute gets kicked up to a higher level. In other words, Iran has a license to stall for two full weeks whenever it does something suspicious.

After two weeks, the problem gets handed over to the Joint Commission, a new body whose membership and responsibility is defined in Annex IV to the agreement. Basically, the commission has eight members, one for each of the countries who are party to the agreement, plus the EU. A majority of five commission members may “advise” Iran on how to resolve the inspectors’ concerns. The commission has seven days to address the inspectors’ concerns, after which Iran has three days to implement any recommended measures. So, at minimum, Iran will have 24 days to clean up any suspicious sites before inspectors get a first look.

Posts : 11865
Join date : 2012-06-14
Age : 68
Location : Pensacola, FL
Benjamin Netanyahu is a petulant and arrogant world leader. Obama does not trust him, and many other world leaders apparently do not trust him either.

I am glad that President Obama is taking our country back from the clutches of AIPAC. The Republican Congressional leadership who wants to kiss Bibi's ass all of the time are very shortsighted.

You are an intelligent human being.  I do not know your degrees or what science courses you have taken, but any storage of nuclear material leaves trace radioactive makers which in many cases can be traced many years after the storage of those.  Additionally we will have constant satellite observation on suspicious sites.  The agreement could have a two month delay.  If they are cheating, it will be discovered.

There is a viable argument that the Iranians could have a complete separate facility yet undiscovered by Our and the Israeli intelligence, and this agreement will allow them to continue in that mystery facility, but the checks and balances in the agreement have strict control measures on the material from Iranian Uranium mines to production facilities........unless this secret facility was built on top of a secret Uranium mine, it will be discovered.  These criticism are sophomoric and lack intelligence.  The right question will be what will the resolve be after a violation is discovered, not that they are going to somehow dupe us......they will not do that, but I will bet now they will test the limits like a child, and the much more important question will be the methodology of compliance.   Nobody is saying trust the Iranians.  Verification is not 100% certain, but is nearly that percentage that violations will be caught.....that is easy, and again the small bus crowd is pointing to the wrong part of the agreement, but after these absurd attempts to find fatal flaws in this agreement end in humiliation, maybe we can focus on the very difficult job of ongoing compliance, and how difficult this becomes over time.   The war option will not be extinguished, but it will take unflinching resolve by the international community to meet every challenge with shared strength and certainty.

Re: The World Rebukes Netanyahu