Little Marco Gets Smacked Down

"Florida’s Republican senators have asked for federal funding to help with relief after Hurricane Ian ripped through the state ― despite neither lawmaker voting on Thursday for billions in disaster relief, some of which would go toward hurricane recovery efforts.

On Friday, Sens. Marco Rubio and Rick Scott sent a joint letter to the Senate Appropriations Committee chairs asking for funding to “provide much needed assistance to Florida.” The letter was first reported by the Tallahassee Democrat.

“Hurricane Ian will be remembered and studied as one of the most devastating hurricanes to hit the United States. Communities across Florida have been completely destroyed, and lives have been forever changed,” the senators wrote.

“A robust and timely federal response, including through supplemental programs and funding, will be required to ensure that sufficient resources are provided to rebuild critical infrastructure and public services capacity, and to assist our fellow Floridians in rebuilding their lives.”

But just one day earlier, Scott and Rubio refused to vote for such additional funding. The stopgap spending bill that the Senate passed on Thursday includes about $18.8 billion in additional funding for the Federal Emergency Management Agency to respond to Hurricane Ian and future disasters.

All 25 senators who refused to vote for the bill were Republicans. Scott voted against it, and Rubio didn’t vote at all. The House also passed the bill, with Republicans overwhelmingly voting against it..."

(Matt Gaetz in the House also voted against the appropriations bill).

Posts : 2428
Join date : 2017-04-21
In short, Republicans are playing these games because they know Biden and Democrats will fund hurricane relief anyway. So Republicans can carry on their posturing about how cruel and heartless they are (which for some twisted sadomasochistic reason that probably has something to do with their daddies gets conservatives all turned-on... even when they're victims of it!) because they know that even if they act like a bunch of pricks, Democrats will still take care of their people for them. Unlike Trump, who let California burn because not enough people there vote for him. Biden's governing to help even the people who don't like him, while Republicans are still playing their stupid tribal games.

Also, DeSantis is being a total dumbass, spouting all this "shoot the looters!" shit. I know people who are trying to help with the relief efforts and they've had guns pulled on 'em when they show up to help somebody cut a tree out of their driveway or whatever. DeSantis isn't any kind of leader, he's just in the fucking way. 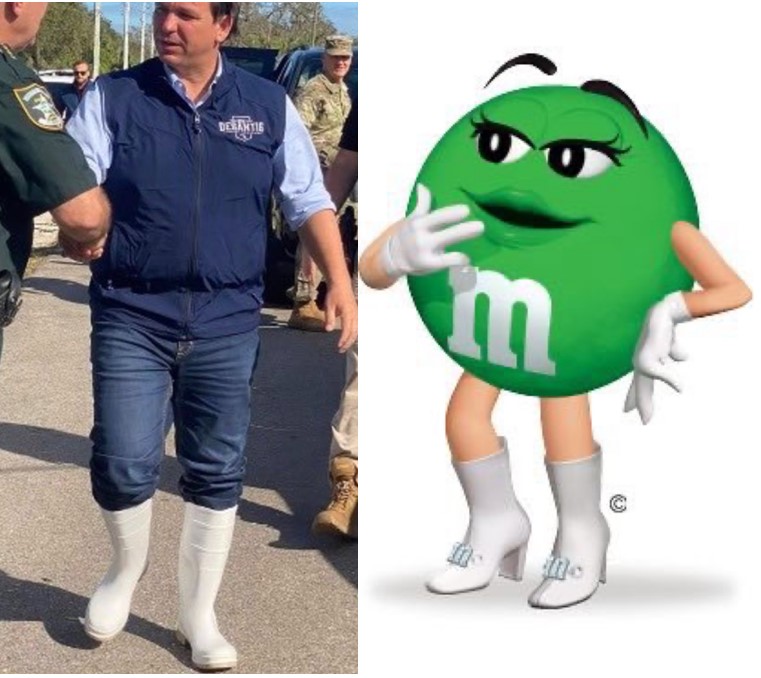 OH MY! No need to worry about Ron monkeying things up. Even his boots are white. Ooga!

The only thing worse than this piece of shit is the scum who try to defend him or think he's doing a "good job." I've seen conservatives all over the place trying to post everything that even makes him look borderline-competent. They're setting such a low bar for this slithering fuck that it'd almost be comical if he weren't such a fascist.

Re: Little Marco Gets Smacked Down

» Did Marco Rubio Inhale?
» State Department gets smacked on Benghazi
» PNJ LTE: Questions for Sen. Marco Rubio
» PNJ LTE on Marco Rubio, Sunday 10/2/16
» Little Marco is Put Out on the Street by Protesters