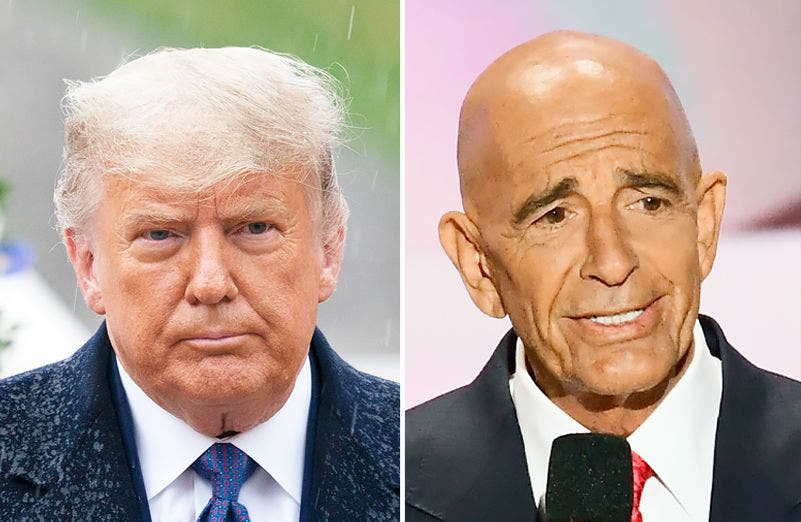 The former chairman of Donald Trump’s inaugural committee, Tom Barrack, was indicted by the Eastern District of New York yesterday for using his relationship with the soon-to-be president to facilitate communications between Emirati officials and Trump in an attempt to influence foreign policy and making a $374 million dollar profit in the process.

Barrack, a private equity investor and informal advisor to the Trump campaign in 2016, is one of three individuals named in the Eastern District of New York’s 9-count superseded indictment.  Investigative journalist Scott Stedman tweeted:


In a statement released by the Department of Justice Office of Public Affairs, the Acting Attorney General of the DOJ’s National Security Division is quoted as saying:

“The defendants repeatedly capitalized on Barrack’s friendships and access to a candidate who was eventually elected President, high-ranking campaign and government officials, and the American media to advance the policy goals of a foreign government without disclosing their true allegiances. The conduct alleged in the indictment is nothing short of a betrayal of those officials in the United States, including the former President. Through this indictment, we are putting everyone — regardless of their wealth or perceived political power — on notice that the Department of Justice will enforce the prohibition of this sort of undisclosed foreign influence.”

According to the indictment, when Barrack was working with the Trump campaign, he was contacted by a UAE citizen — and indicted co-defendant — Rashid Sultan Rashid Al Malik Alshahhi via email. He told Barrack that a high-ranking Emirati government official was, “very much focusing on building the right relationships to help the country and he knows ambassadors can’t do much and they are limited even if they are active.”

Most of the emails in April and May 2016 were in regards to Trump’s upcoming “Energy Speech,” with the then-presidential candidate expected to announce the rollback of Obama’s environmental policies if elected. Others concerned the arranging of meetings between Barrack and Emirati officials, allowing them to preview — and edit — the words that Trump would speak.

According to the indictment:

“On or about May 12, 2016, the defendant THOMAS JOSEPH BARRACK sent the defendant RASHID SULTAN RASHID AL MALIK ALSHAHHI a draft speech to be delivered by the Candidate about United States energy policy (the ‘Energy Speech’) and asked for feedback, informing AL MALIK: ‘It is my own first draft.’ AL MALIK emailed the draft speech to Emirati Official4. Thereafter, AL MALIK sent a text message to BARRACK proposing language for the draft speech that praised Emirati Officia 1 by name and stated, ‘This is what I got from them.'”

From having 28 pages removed from the draft that implicated Saudi Arabia in the 9/11 attacks, to handpicking the ambassadorship, Al Malik’s relationship with Barrack — and by extension, Trump — was as corrupt as it was influential, as seen on pages 28 and 29 of the indictment:

Beginning in 2016, Matthew Grimes – Barrack’s aide and the third defendant listed on indictment – sent an email to an employee of Colony Capital, Barrack’s investment company. The email contained a proposal to create an investment fund which Grimes also emailed a copy to himself. Barrack traveled to the Middle East in 2017 and met with several Emirati officials to raise money. He managed to raise $374 million between 2017 and 2018.

With nine felony charges — including obstruction, acting as a federal agent, and making material false statements — and the DOJ’s commitment to prosecuting the case fully, the case against Barrack appears to be air-tight.

“These arrests serve as a warning to those who act at the direction of foreign governments without disclosing their actions, as well as those who seek to mislead investigators about their actions, that they will be brought to justice and face the consequences.”

But despite the mounds of evidence against Barrack, Grimes, and Al Malik, the billionaire spy can use “graymail” in a last-ditch effort to escape accountability, according to CNBC. “Graymail” is defined as when a defendant threatens to expose classified government information in an attempt to force the US government to drop their case. Barrack’s attorneys declined to answer CNBC‘s question if it was considering using such a tactic in their defense.

For at least three years, Barrack’s influence changed the trajectory of Middle Eastern relations and those with our allies. Everything from campaign platforms, speeches, handpicked Congresspeople, Ambassadorships, and policy decisions were influenced. Nothing was off-limits.

Stay tuned to see whether the Justice Department can wrangle a conviction of this close Trump ally.