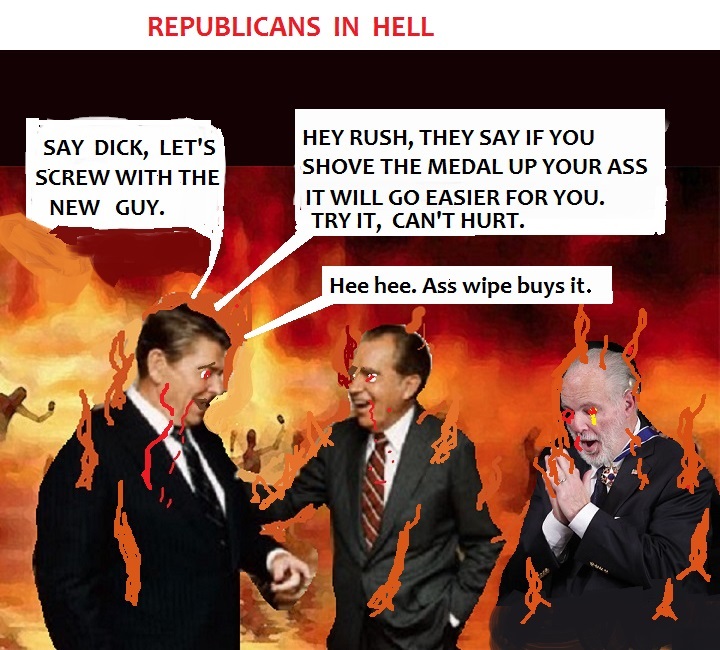 Let me say to him what he said when Jerry Garcia died.

Just another dead doper and a dirt bag!

got any oxy left rush?


Why not? Someday racist, cracker barrel boy Ron D will get the same honor when they dump his smelly, toxic body into the ground.

Posts : 9725
Join date : 2012-06-14
So sad that Rush is gone. If the scumbag was still around he might air a tribute to Monkey It Up boy Ron DeSantis. Something like 'DeSantis The Magic Cracker Boy.'


Commissioner Nikki Fried
@NikkiFriedFL
·
6h
Lowering to half-staff the flag of the United States of America is a sacred honor for fallen heroes — not a partisan political tool.

Therefore, I will notify all state offices under my direction to disregard
@GovRonDeSantis
' forthcoming order to lower flags for Rush Limbaugh.

Posts : 2164
Join date : 2017-04-21
I'm pretty sure I've talked about this before here (probably a couple times), but I used to work in radio, and my station, after a few format changes (when I started there were were classic rock), went to talk radio. We aired Rush Limbaugh. He was finally the dude that made us change formats again because he cost us so much money. We could get NO advertisers for his show, because right-wingers are fucking moral cowards: a lot of right-wing business owners LOVED his show, but they wouldn't advertise on it because they KNEW Rush was a shitbag and they'd get boycotted... in fucking MISSISSIPPI. That's how bad the guy was. We had to fill all Rush's local avail slots with PSAs because even his fans were terrified of being associated with the kind of toxic hatemongering shit he was spouting.

The man never did anything but poison people's minds and monetize hating each other. He brainwashed a generation, like our board's pet simpleton, who's so damaged he can't even think at this point. I saw firsthand how Rush poisoned people: my mom had a friend who started listening because she thought Rush was "funny," and she ended up so radicalized that she hated the world, broke up with her husband, dropped all of her friends, alienated her daughter, moved out of town, gained a couple hundred pounds and eventually died with nobody. She didn't even like her cats anymore, she because so bitter and miserable... all because she was obsessed with Rush. That dude, more than anybody, ruined her life, and I watched it in real time. I was raised around that lady since early childhood -- we were buddies because we both loved horror novels, and I worked with her briefly moving a lot of boxes and furniture around at her office, back when she was starting up her Rush-radicalization. The entire time that show was on she'd get nasty as hell and full of rage. It was Jekyll-Hyde weird.

Back at the radio station we always hated when Rush's people would call us up to check how things were going, because they constantly "shared" racist jokes. One guy really pissed our program director off by laughingly sharing what he thought was a "great story" about he and one of Rush's producers terrorized a quote-unquote "little Jew bastard" who owed them some money, and threatened the guy with violence until he paid the bill AND some other money they strong-armed out of him. They were flat-out criminals... and thought it was funny. And Rush sent them to do it.

This isn't the only encounter I had with racist right-wingers, either. After that gig I went on to work for a network that my boss eventually sold to some big right-winger... I don't remember the guy's name but I do know he owned the Minnesota Vikings. Anyway, our boss was always telling us jokes that Vikings-guy told him over the phone, shit like building robots to work on a golf course, but they were too shiny so they painted them black... and then the robots got lazy and wouldn't work anymore and sat around smoking crack, ha ha, really fucking funny. Assholes.

Anyway, yeah, fuck Rush, I hope it hurt on the way out, I hope he died howling. He did more to ruin this country than just about any other person in the past 50 years, all by showing right-wingers that there was profit to be made in setting American against American, and creating enemies to hate. That's why there are "news networks" that are nothing but hateful lies, and thousands of YouTube channels spreading more Nazi poison. That's the only legacy that this shitcake has.