Now that Republican voters have embraced Donald Trump’s declaration that elected women of color who criticize his policies should “go back to where they came from,” this seems like the perfect opportunity to remind Republicans exactly what kind of people they have become.

In an op-ed published in Haaretz, Israel’s longest-running newspaper, editor and correspondent Chemi Shalev explains how the impulse to expel persons whom the state deems disobedient, disloyal or otherwise “undesirable” echoes the Nuremberg tactics of another famous “conservative” political party from several decades ago.

It’s hard to tell the difference between the large signs hung outside German cities declaring “Jews, immigrate to your land, in our land we already know who you are” and Trump’s suggestion to four non-white Democratic Congresswomen to “go back” to what he previously described as their “shithole” countries. Both imbibe from the same toxic cesspool of spreading division and hate, while defining the different as an alien and dangerous “other” in order to advance political and ideological aims.

One byproduct of being both Jewish and working for the state of Israel’s oldest newspaper is that you can draw upon a remarkably extensive institutional memory. Shalev takes us back to 1938 when a German company introduced a popular board game which challenged people to do just what Donald Trump and his supporters are clamoring for today. 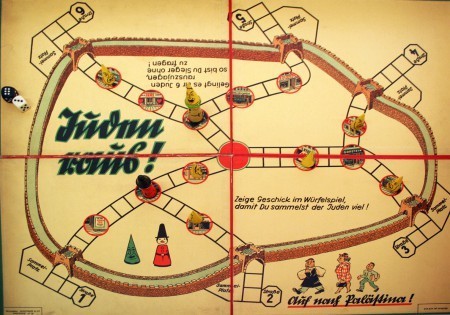 In 1938, the German company Gunther and Co. came out with its brand new board game, “Juden Raus.” Participants in the game, which became immensely popular, had to extract Jewish citizens from their German cities to “concentration points,” over which hung a banner reading “Auf nach Palästina!” - Off to Palestine. The first player to successfully relocate six Jews from Germany to Palestine was the winner.

In its promotion, the company boasted that Juden Raus was an “up-to-date and outstandingly jolly party game for grown-ups and children.” After five years of Nazi rule, expelling Jews to “where they came from” was as natural and desirable as buying Boardwalk and Park Place.

With Republicans by virtue of either their abject silence or willing, vocal participation now aligning themselves with an exclusionary and intolerant ethic reminiscent of Nazi Germany, perhaps we can expect the same type of board game targeting immigrants and women of color promoted in the Republican social media universe. As Shalev acknowledges, at this point it's hard to imagine any low they won’t stoop to, even as the repulsive historical analog they seek to emulate stares them straight in the face.

As with Israel’s Likud and their leader Netanyahu, but a thousand times over, Trump’s invectives highlight the moral depths to which the Republican party has sunk: It has transformed from a Grand Old Party into a cheerleading squad that prostrates itself before its master, no matter what he says or does. Whether out of fear or hope for favor or both, the Republicans’ feebleness also echoes the conduct of similarly spineless political parties, which facilitated but later succumbed to the most evil tyrants of the 20th Century.

Shalev acknowledges that Trump is enjoying a surge in popularity among many segments of Israeli society, and without directly saying as much, wonders whether Trump’s singling out of these four women, all of whom have been critical of Israel, and two of whom are Muslim, serves for some Israelis as a kind of filter to the stark inhumanity Trump is espousing, the same one which Jews have been painfully aware for centuries, and one which he would expect them to be sensitive to.

Sadly, a great number also identify with his race-baiting remarks, especially when these are directed at Muslim legislators with an anti-Israeli animus. The history of the Jewish people as a persecuted minority perennially depicted as “the other,” no matter how long they’ve lived in the same place, doesn’t seem to speak to us anymore. As Israel’s venerated poet-columnist Natan Alterman once asked, in a slightly different context - “Where will we put our shame?”

“Where will we put our shame,” indeed.  At least in this country, that’s a question most of us have stopped asking Republicans by now.