Posts : 22918
Join date : 2012-06-13
Location : Armpit of Florida
I took out an obamacare policy for the month of January.  Since I became eligible for medicare on Feb 1,  I of course was no longer eligible for obamacare after that date.

Both Blue Cross and obamacare told me I needed to call obamacare and tell them I was ending the obamacare policy at the end of January.  So about the middle of January I did just that.
That's when the moron on the other end of the phone cancelled it that day (January 17) even though I told her emphatically that I wanted it cancelled at the end of the month because I was no longer eligible for it beginning in Feb.
And then after that,  we mailed a form in to also ensure cancellation.

But of course I still got a bill for the obamacare policy for the month of february.
And Saturday,  I get another bill for march which shows that I'm past due on the february payment.
So this morning I called the phone number on the statement.  And I spent 45 minutes going through one phone directory after another.  Finally the only thing it took me to was a place where I can buy a new obamacare policy.  I never could get to anywhere I could tell them to stop sending me past due notices for insurance I cancelled at the end of January.

And since apparently there is no way to get these rotten sons of bitches to understand the policy was cancelled,  it looks like now I'm probably gonna be turned over to bill collectors when I don't make all these payments for insurance I don't have.  Insurance I'm not even eligible for after Feb 1.

Here's the statement I got Saturday to prove to you I'm not imagining all this. 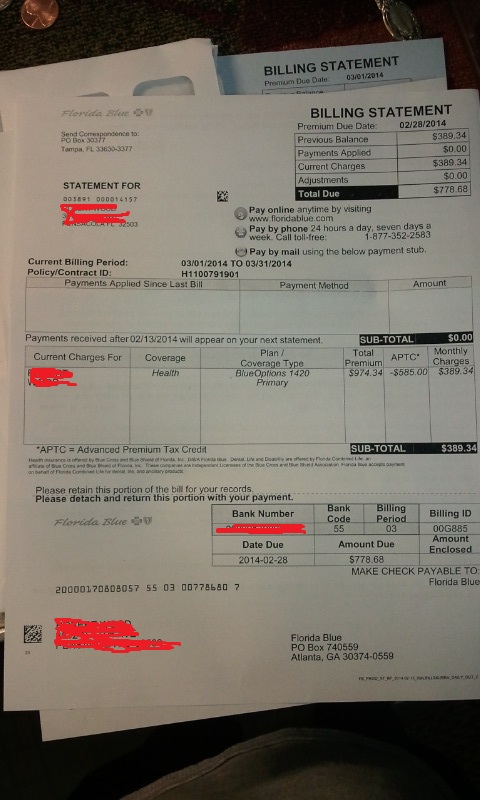 Guest
Obamacare doesn't have anything to do w/ the billing from the insurance co. It's Blue Cross doing it. Call the local BlueCross office in Pensacola.

Dreamsglore wrote:Obamacare doesn't have anything to do w/ the billing from the insurance co. It's Blue Cross doing it. Call the local BlueCross office in Pensacola.

I knew you were gonna say that and blame it all on Blue Cross,  dreams.
But you don't understand.  Both Blue Cross and obamacare told me I COULD CANCEL THE POLICY ONLY THROUGH OBAMACARE,  NOT BLUE CROSS.
And I've already contacted Blue Cross by phone.  And Blue Cross has already sent in a form signed by me that says I canceled.

When I call the phone number on the statement,  it will only let me proceed when I give them my policy number.  And when I do that,  it takes me right to the Marketplace (the obamacare Marketplace).

It's all a monumental clusterfuck of unprecedented proportions.

ppaca wrote:Just ignore them, they will stop coming after May 1.

I'll do just that, ppaca. But in the meantime, it's giving me some good entertainment. I'm looking forward to the April bill already. lol

Posts : 4172
Join date : 2013-10-05
Age : 74
I just checked obama never told blue cross you cancelled, in fact it looks like the govt may have paid blue cross for feb. So don't worry about it obama will catch up with them sooner or later. Apparently bc can't see that you are also on a medicare supplement.

ppaca wrote:I just checked obama never told blue cross you cancelled, in fact it looks like the govt may have paid blue cross for feb.

That gives me the best laugh I've had all day.  Thanks for that,  TG. lol

» Is this what they call a "happy ending"?
» I just heard Richard Haas give the best summation of Obama, Putin and the situation in Syria I've heard yet.
» I always thought you guys were tuffer than me. Youve all surprised me.
» Sad Ending
» Newsweek Ending Print Edition December 31st