“It is with a heavy heart that I announce the passing of my brother David,” Charles Koch announced in a statement. “Anyone who worked with David surely experienced his giant personality and passion for life.”

Koch and his 83-year-old brother, Charles, ran Koch Industries, one of the nation’s largest privately held conglomerates. Its investments include subsidiaries involved with manufacturing, refining and distribution of chemicals, fibers and minerals.

Their father, Fred Koch, founded the company in 1940, the year David was born.

The brothers, whose last name is pronounced coke, financed one of the most influential political networks in the modern era. The sprawling political empire includes conservative and libertarian nonprofits such as Americans for Prosperity, Freedom Partners and Concerned Veterans for America.

David Koch retired in June 2018 as executive vice president at Koch Industries and ended his involvement with other Koch affiliated groups due to health reasons. He was diagnosed with prostate cancer nearly two decades earlier.

At the time of his death, his net worth was more than $42 billion, making him the world’s 11th-richest person, according to Forbes.

In 1980, the younger Koch was nominated as the vice presidential nominee for the Libertarian Party. His running mate at the time was Ed Clark and their campaign ran on abolishing Social Security, the Federal Reserve board, welfare, corporate taxes and minimum wage laws.

The ticket received only 1 percent in the election that saw Ronald Reagan defeat President Jimmy Carter, but it was the most votes ever garnered at that time by a candidate from the Libertarian wing.

Koch’s political views were often mirrored by the party he once represented when he ran for president. He was a vocal backer of free market policies and a reduction in government spending. He was also a noninterventionist, calling for the United States to have limited involvement in wars around the world.

While these ideologies often led to the brothers backing Republican candidates for public office, they clashed with presidents from both sides of the aisle, including former President Barack Obama and President Donald Trump.

The rift between the Kochs and Trump have been primarily associated with the administration’s implementation of import tariffs on goods being shipped into the United States from trading allies such as the European Union, Canada and Mexico.

The network has produced numerous television ads against the tariffs. They also spoke out against the administration’s failure to protect young immigrants who had been covered by the Deferred Action Childhood Arrivals program.

At the Kochs’ summer 2018 donor summit in Colorado Springs, Colorado, leaders of the organization went as far to suggest they could go back Democrats in the 2018 congressional midterm elections.

“If you are a Democrat and stand up to [Sen.] Elizabeth Warren to corral enough votes for financial reform that breaks barriers for community banks and families, you’re darn right we will work with you, ” Americans for Prosperity CEO Emily Seidel said in July 2018.

Previously, the Kochs pledged they would spend nearly $400 million in the 2018 midterm elections.

Koch was also known for his contributions to the art and medical fields.

Over the years, Koch and his family foundation, along with other recipients of Koch philanthropic support, have donated millions to battling cancer. He was a board member of the Prostate Cancer Foundation and provided $100 million toward the construction of the David H. Koch Center at New York Presbyterian Hospital.

He also gave $100 million to the New York State Theater at Lincoln Center, now known as the David H. Koch Theater, and donated $65 million to renovate the plaza at the Metropolitan Museum of Art.

Posts : 9301
Join date : 2012-06-14
No matter how many evil bastards die there's always another evil bastard that comes along and takes their place.

Sal wrote:There’s one grave I would gladly piss on. 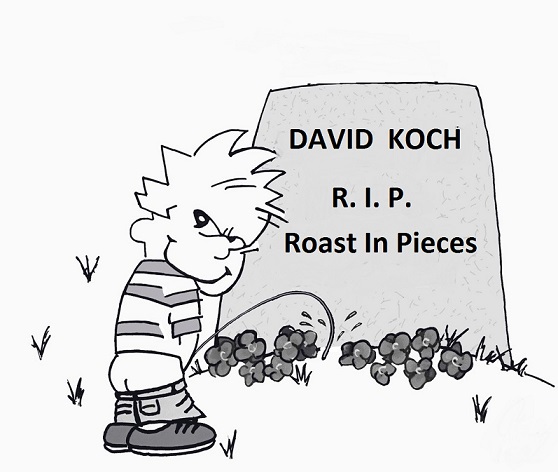