Re: Racist Randy Weaver Kicks The Bucket And White Terrorist Murders 10 Black People in Buffalo NY Tue May 17, 2022 11:11 am

Posts : 2395
Join date : 2017-04-21
And conservatives are already trying to downplay this shooter and their media's part in creating him. Despite what he said in his own manifesto, he wasn't indoctrinated and fed full of the hogwash Tucker constantly spouts, he was just "mentally ill."

Spoiler alert: FOX News is going to call the next thousand white-supremacist gunmen "mentally ill," too. You're never, ever going to get them to admit they're spawning this shit, no matter how many shooters sound like a parrot that's been living on Tucker Carlson's set.

Because they've figured out that the only thing their base really responds to is a diet of pure red meat, and they want increasing levels of hate, the right-wing, from elected officials to their "let's pretend it's news" propaganda outlets are aggressively planting seeds of terrorism as fast as they fucking can. And then dismissing everything that sprouts as "just a weed."

Ain't a weed, it's the fucking crop. Really, you listen to Tucker Carlson now and what else can you even expect the end result of that shit to be?

And what about THIS ridiculous shit? https://twitter.com/RonFilipkowski/status/1524713155179560961 That's a grown man acting that way, y'all. I mean, that tantrum would be hilarious (especially since it goes straight into a commercial because pssssst! EVERY-FUCKING-THING is a commercial on the right now, all of this rage is a product to be bought,) except there are loads and loads of trained-to-buy-into-anything hate-junkies who actually believe that guy.

And how 'bout this cretin? https://twitter.com/TheTNHoller/status/1526276617798041600 In church, no less, just in case you had any doubts that their religion's turned into a sick joke. Love of Jesus? Hell, no, all they're getting there is more rage, more division. Church is just a hate-refueling-station now. That's pure hate. Chopped up and laid out in lines to be snorted up like fucking Scarface.

Again and again and again, and then every time somebody acts on what they've been told, they're all "Duuuurrrrr, well that guy was crazy, durrrrr, how did DAT happen?!" Then they'll try to dig back about half a dozen years to the last left-wing violence to try to what-about their way to some make-believe that "both sides are doing it." Maybe both sides are doing it, but one side seems to be doing around 95 fucking percent of it!

But are their "news outlets" going to stop sounding like Stormfront? Nope. Because their base IS Stormfront now. More and more every day, that's what they've got. And it's all they've got to play to.

They're just trying to stir up a lot of over-gunned scared-of-every-fucking-thing moment-of-their-greatness-flickering too-old-anymore ghost-in-the-sky plodding fuckwits trying to convince themselves they're "warriors" in some "fight," when all they really are are a bunch of weak bigots who can barely trundle out to check their goddamn mail, and who are terrified that the people they've spent years treating shitty are going to outnumber them and call in their tab.

I'm so tired of watching 'em. I'm not sure there's any level of privilege conservatives can ever be given that would let them feel secure enough to stop seeing themselves as persecuted victims. They're standing on everybody else's necks, boo-hooing that their fucking feet hurt.

Honestly, if you can't be a white Christian male in America without feeling "persecuted," then you'd never survive an hour being anything else, anywhere else.

And no playing field can ever be level enough for 'em. America's already cheating everybody by clinging to the electoral college, even though it disenfranchises everyone. My vote in Mississippi doesn't really get to count because I'm outnumbered by morons, but a hell of a lot of Republicans in California don't get their votes counted, either. And, meanwhile, elected Republicans don't have to try to do anything for California or New York, just like Democrats feel like they can safely ignore Mississippi and Alabama. It's not good for anybody, but conservatives cling to it because they know they can't compete unless the game is rigged.

Don't even get me started on the gerrymandering. That's endless.

And despite all that they seem to feel like murdering your political opponents is now a winning issue for 'em. Let Kyle Rittenhouse just fucking walk, make him a star as CPAC, and then get surprised that some 4Chan "hero" shoots up a grocery store full of people he doesn't know but knows he hates.

Damn but this world's tiring. We're having to drag an anchor of bloated stupidity behind us while we try to do anything decent.

Re: Racist Randy Weaver Kicks The Bucket And White Terrorist Murders 10 Black People in Buffalo NY Wed May 18, 2022 6:11 am 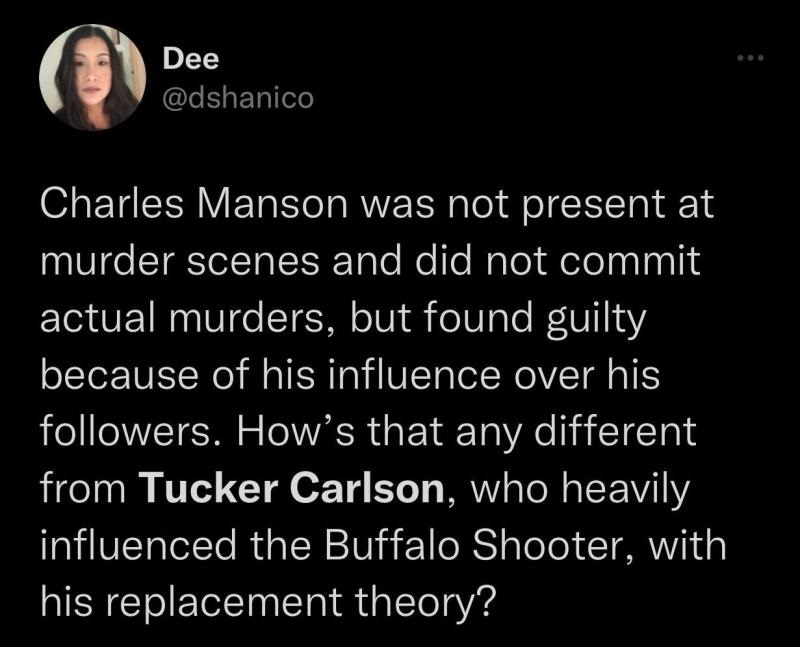 Re: Racist Randy Weaver Kicks The Bucket And White Terrorist Murders 10 Black People in Buffalo NY Wed May 18, 2022 9:34 am

This is what we're likely to be facing in the next few years.  (Funny thing:  all the lefties I've sent this to now want one of these guns!

).  But, knowing about it is a good thing. Right now it'll be a little price-prohibitive to a lot of the people who wanna "play soldier"  (they're around $8,000 and just the license will cost ya $800), but once the military adopts it, there are people who are going to want to get these instead of ARs, and the price'll drop.

And the takedown of the hatemail in the second half is brilliant.


This guy's plan sounds a little too simplistic to fix everything as much as he thinks it will -- it's not easy to change attitudes among humans -- but he's right -- they aren't going to be able to take all the guns, so changing attitudes about 'em is one factor.  So I don't fully agree that it'd have as big an impact as he believes, but he's still right to a big extent and what he says is worth listening to, and what he's suggesting's worth trying.  I don't think it'd be a fix, but it'd be a mitigator, and mitigation is good.

Re: Racist Randy Weaver Kicks The Bucket And White Terrorist Murders 10 Black People in Buffalo NY Fri May 20, 2022 9:55 am

Posts : 10575
Join date : 2012-06-14
With all these white cracker barrel shooters, the white race isn't being replaced fast enough. Maybe BLM needs to do less burning and looting and more targeting. Less like BLM and more like the Black Panthers of the sixties. Then again the white psycho school shooters are doing a good job of blowing the brains out of mostly white students that will never grow up to be angry incel shooters. Not that anyone indorses mostly white students getting their brains blown out.

Re: Racist Randy Weaver Kicks The Bucket And White Terrorist Murders 10 Black People in Buffalo NY Fri May 20, 2022 11:52 am