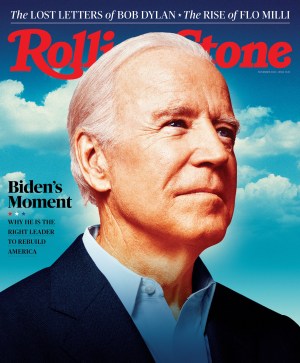 Vice President Biden’s platform offers progressive solutions to every major problem facing the country, and he has the experience to put those principles into practice

"We’ve lived for the past four years under a man categorically unfit to be president. Fortunately for America, Joe Biden is Donald Trump’s opposite in nearly every category: The Democratic presidential nominee evinces competence, compassion, steadiness, integrity, and restraint. Perhaps most important in this moment, Biden holds a profound respect for the institutions of American democracy, as well as a deep knowledge about how our government — and our system of checks and balances — is meant to work; he aspires to lead the nation as its president, not its dictator. The 2020 election, then, offers the nation a chance to reboot and rebuild from the racist, authoritarian, know-nothing wreckage wrought by the 45th president. And there are few Americans better suited to the challenge than Joe Biden.

It is no exaggeration to say that the American experiment hangs in the balance in the November election. Four years of Trump have left 215,000 of us and counting dead from a serious but preventable public-health crisis, tens of millions out of work or underemployed, a cataclysmic climate crisis ignored, our democratic institutions in disrepair, and the public’s faith in its elected representatives at an all-time low.

Is America capable of stepping back from this precipice? Of turning away from the politics of resentment to rebuild our country based on a shared idea of American progress? That remains to be seen, but electing Biden is the first step. Despite the multiple crises at hand, Biden envisions a revival anchored in unity. “We have too bright a future to have it shipwrecked on the shoals of anger and hate and division,” Biden said in an October address near the battlefield at Gettysburg.

The Democrat has delivered more than just happy talk. Biden has been leading by example in his campaign. He showed confidence and bridge-building by tapping his harshest critic from the primary debates, California Sen. Kamala Harris, as his running mate. And Biden has won a diverse backing that would have been inconceivable outside of this 2020 moment. Think of it as a coalition of the decent, ranging from Bernie Sanders, Barbara Lee, and Alexandria Ocasio-Cortez on the left, to “Never Trumpers” John Kasich, Cindy McCain, and Bill Kristol on the right. Biden has promised to be a president for all Americans, standing in contrast to Trump, who has only governed for his partisans and once mused aloud that the nation’s pandemic death toll didn’t look so bad “if you take the blue states out.”

Biden’s broad acceptability is his strength. But inside his big tent, Biden’s platform offers progressive solutions to every major problem facing the country. And the former vice president has the experience to put that platform into practice:..."

Posts : 10799
Join date : 2012-06-14
Only a drugged crazed rightard like you would even stop to think about it. Real Americans expect them to endorse the worthy candidate. Useful idiots like you hope they will endorse the criminal opponent, Trumpenis in this case.

Posts : 2428
Join date : 2017-04-21
Things that people read seldom endorse Republicans, because what's the point? It's like going on the radio to sell hearing aids. The audience just ain't there.