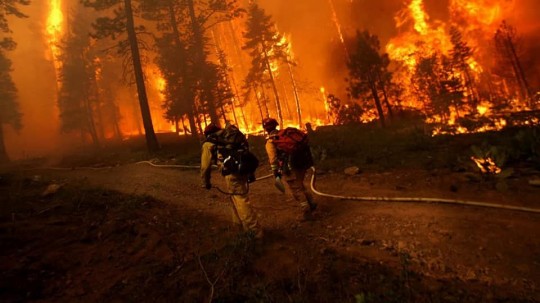 “High wind and extremely low humidity have helped the Five Mile Swamp Fire grow to almost 10 times the size from morning estimates. Winds upward of 20 mph pushed embers from the fire across Interstate 10 and it is now estimated at 2,000 acres with 20% contained,” Florida Forest Service PIO Joe Zwierzchowski said. “the fire has burned several structures south of the Interstate but there is no firm number.”

The Florida Forest Service continued to aggressively fight the fire through the night with 18 tractor/plow units, three helicopters and a significant number of resources from multiple fire departments from across the area.

Firefighters will continue to work to extinguish the fire for the next several days, Zwierzchowski said.

Residents south of I-10 and east of Avalon Boulevard were evacuated, and I-10 remained closed Thursday morning between Exit 22 at Avalon Boulevard and Exit 31 at Highway 87, according to the Florida Highway Patrol.

“This is an extremely dangerous and fast-moving wildfire situation that is evolving rapidly, so everyone in the affected area should follow directions from state and local officials,” said Florida Agriculture Commissioner Nikki Fried, whose office includes the Florida Forest Service. “All residents and travelers should heed evacuation requests and closely monitor the media for updates on the wildfire and reopening of I-10 and local roads. We thank our brave local and wildland firefighters for working swiftly to control this wildfire.”

Hundreds of Gulf Power customers were without power in the area overnight Wednesday due to damaged utility poles.

The started Monday afternoon when a controlled burn by a private contractor got out of control.

Another fire in Beulah of unknown origin burned 300 acres, and a fire in Walton Co. was an illegal burn...charges pending.

What kind of idiot starts a controlled burn in this weather?