Pensacola Discussion Forum » Politics » Turkey to send troops into northern Syria as US pulls out of area, White House says

Turkey to send troops into northern Syria as US pulls out of area, White House says

(CNN)In a remarkable announcement late Sunday night, the White House said that United States forces in northern Syria would move aside in advance of a planned Turkish military offensive.

The move marks a major shift in US foreign policy and effectively gives Turkey the green light to attack US-backed Kurdish forces. The group, long considered as among Washington's most reliable partners in Syria, has played a key strategic role in the campaign against ISIS in the region.
Following a phone call between US President Donald Trump and Turkish President Recep Tayyip Erdogan, the White House said that Turkey would soon begin a military offensive and US forces would not be involved in the operation.
"Turkey will soon be moving forward with its long-planned operation into Northern Syria," a statement said. "The United States Armed Forces will not support or be involved in the operation, and United States forces, having defeated the ISIS territorial 'Caliphate,' will no longer be in the immediate area."
The White House added Turkey would now be responsible for all captured ISIS fighters who are currently being held by US-backed Kurdish forces in northern Syria.
As of last month, the US said about 1,000 US troops were operating in northeastern Syria. Sunday's statement did not specify if this constituted a full withdrawal of personnel from the country.
...

Posts : 4509
Join date : 2010-01-02
Age : 74
Location : Gulfport/New Orleans
Totally despicable. This is a compulsive knee-jerk response by djt made without any consultation with our military or allies.

Donald states he has unmatched wisdom in one of his Tweets this morning. Double cross our allies, again. Will Mattis now speak out? 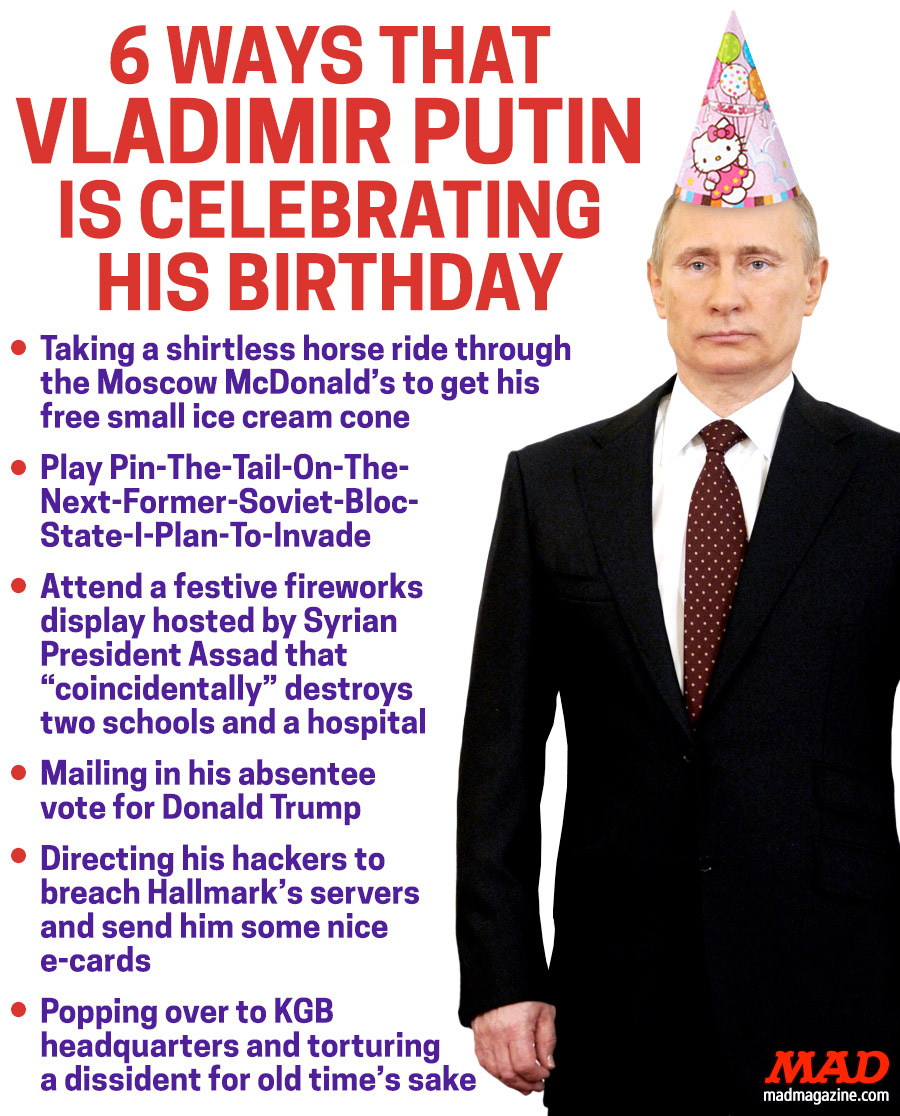 Posts : 2026
Join date : 2017-04-21
Stab your allies in the back and soon you won't have any allies. In this case, literally, since they'll likely kill them all as soon as they're unprotected.

This is going to badly undermine America's reputation as a worthy partner whose word can be trusted. But, that's what happens when our obligations fall contrary to Vladimir Putin's wishes, and our president is Putin's squeal-like-a-pig boy.


As even Republican lawmakers and foreign policy experts reel over Donald Trump’s unilateral decision to abandon Kurdish allies to an assault from Turkey in Syria, the president himself apparently has an explanation: “I have a little conflict of interest” concerning Turkey.

Trump made the comment in a Breitbart News interview in December 2015 during his presidential campaign when asked how he would handle Turkey and Syria.

“I have a little conflict of interest ’cause I have a major, major building in Istanbul,” Trump boasted in response. “It’s a tremendously successful job. It’s called Trump Towers — two towers, instead of one, not the usual one; it’s two. And I’ve gotten to know Turkey very well. They’re amazing people, they’re incredible people. They have a strong leader.”

He said then that the situation was “complicated,” adding, “I thrive on complicated.” Trump did not reveal what he would do in the region if he were to become commander in chief.

Trump still profits from Trump Towers in Istanbul, and the “strong leader” then was the same as now: President Recep Tayyip Erdogan.

Though his continuing business interest in Istanbul is widely known, his own admission that it represents a conflict of interest is startling. Critics have long argued that Trump, as presidents traditionally do, should divest from his businesses to avoid conflicts of interest that threaten to put his personal benefit ahead of the nation’s.

In a late Sunday phone call with Erdogan, Trump suddenly agreed to let Turkey occupy a strip of northern Syria, currently controlled by ethnic Kurds who have been America’s most effective allies in battling the so-called Islamic State. Now supporters fear a U.S.-enabled slaughter of the Kurds, who have a centuries-long dispute with Turkey over self-rule.

“Everyone was absolutely flabbergasted by this,” retired Adm. James Stavridis said Monday on MSNBC, referring to the Pentagon perspective on Trump’s action. “Nobody saw it coming, and that is a real problem when you’re trying to conduct not only foreign policy ... but also military operations. That kind of whipsawing effect is extremely detrimental, not only in this tactical situation but strategically, as our planners try and prepare in other theaters, from North Korea to Afghanistan.” (See the video above at 9:18.)

White House press secretary Stephanie Grisham said Monday that Trump’s decision had nothing to do with the Trump Towers Istanbul complex.

zsomething wrote:
White House press secretary Stephanie Grisham said Monday that Trump’s decision had nothing to do with the Trump Towers Istanbul complex.

zsomething wrote:
White House press secretary Stephanie Grisham said Monday that Trump’s decision had nothing to do with the Trump Towers Istanbul complex.

Almost seems as if he's inviting Kurd freedom fighters to slam a couple of jets into the Trump Twin Towers at some future date.

Posts : 2026
Join date : 2017-04-21
Another thing to keep in mind amidst all this fucking horror... the Kurds are a people without a country. They rely on alliances with powerful nations to survive.

Provided they do survive what Trump is allowing to happen to them (and the Turks are really good at genocide), the Kurds will be unlikely to ever trust the U.S. again. So where will they have to run to?

And Russia will happily use them as we have -- to fight proxy wars on their behalf. And those wars will be against American interests.

I repeat what I have already said so many times: if Donald Trump is not a Russian asset, it's very difficult to come up with anything that he might do differently if he were.

And conservatives are integrity-free cowards who are going along with all of it. They're writing on history's pages now... and what's going on now is never going to look good for them.

I'm all for conservatives committing suicide as a party. Have fucking at it, you pieces of shit, you've never done a goddamned thing except wreck states like mine and give the world's shittiest people a support group; it's high time you closed up shop and got out of humanity's way, and you will not be missed any more than any other burden everyone else has had to carry gets missed. But I hate to see them killing themselves off with so much collateral damage to the country. If America makes it through Trump with any of its reputation intact, it's gonna be due to a lot of patience and sympathy on the part of our allies, who might see that, due to inadequacies in our system of electing presidents, the country's been held hostage by its stupidest, worst people.

Posts : 4509
Join date : 2010-01-02
Age : 74
Location : Gulfport/New Orleans
I called both of my MS Senators this morning and expressed how horrified I was with the decision to reverse by 180 degrees, our position in northern Syria. Can you imagine how hard this is on the troops there, being ordered to stand down and watch as the people they had been charged with protecting are now, overnight, left to be killed? War is bad enough and I know they are trained to follow orders but there must be great anxiety.

This stupid decision benefits Russia, Iran and Syria, oh, and all the ISIS prisoners who the Kurds had been keeping in custody. Trump says today, big deal if they escape, they only wanted to go back to Europe where they came from. What an idiot! So, with this move djt has managed to alienate many in Congress. This is a step too far. Those who support the military are horrified, as we all must be.

I wondered from time to time, what it would be like if the U.S. were not the leader of the Free World, didn't have to keep such a large military, wasn't regarded as the world's policeman. It looks ever more likely that we're going to find out sooner rather than later.

He and Steve Bannon have managed, in about 1,000 days to tear down trade deals, all sorts of treaties (Iran) (Global Climate Agreement), weaken NATO and the EU. He acts the fool at Global conferences and Tweets like a 13 year old (no offense to 13 year olds), lies when the truth might serve as well, shows no understanding of human emotions ETC. and still some people still see him as great.

Here's what Marc Thiessen, a conservative shill from long back, had to say about Trump's stupid move:


Without U.S. support, the Kurds will have no choice but to turn to Russia, Iran and the regime of Syrian President Bashar al-Assad for protection. As a result, Iran will own all of Syria — giving it a strategic anchor in the Middle East and a base from which to attack Israel. Trump has made containing Iran’s expansion a centerpiece of his Middle East policy. Abandoning the Kurds will empower Iran as never before, increase the danger to Israel and require us to deploy more troops to the region to counter Iranian aggression.

The cry that America is fighting “endless wars” is a canard. Our force levels in Syria, Iraq and Afghanistan are a shadow of their former selves, and U.S. forces are not doing the fighting but rather arming and training allies who are doing the fighting for us. That is the right strategy. But after watching Trump abandon our allies in Syria to be slaughtered, why would anyone step forward to help America in the fight against Islamist radicalism? The president can’t have it both ways. If you don’t want American forces fighting “endless wars,” then you can’t betray your allies.

Next time, there'll be more Americans having to fight, because we won't be able to find allies to do a lot of the heavy lifting for us.

If you still see anybody defending Trump, see if you can get them to trade you their car for some magic beans. You'll probably get lucky, because you've found an absolute idiot, and shouldn't feel guilty about exploiting them -- they seem to like that, the way they keep seeking out the people who'll do it.

Re: Turkey to send troops into northern Syria as US pulls out of area, White House says

Pensacola Discussion Forum » Politics » Turkey to send troops into northern Syria as US pulls out of area, White House says