Things sure can go to chit in a hurry

Posts : 36130
Join date : 2012-08-30
My wife had her breakfast club this morning and I had the granddaughters.  I had been planning on going to a poker game at 6pm, but got an email that the game had been cancelled.  So I am thinking I do not have to conserve my energy because I am staying home tonight, so I decide to take the girls and the dogs on an adventure on "sea shell" island and visit the treasure tree.

It is an absolutely beautiful day with the dogs wading in the water and the girls collected mother of pearl clam shells as I sit in the shade enjoying a gentle breeze.  It was absolutely perfect......but my daughter's dog which is a sister to our dog would wander off chasing wildlife.  I would call her and she was back in an instance.   I felt really comfortable because these are islands and the water is really low, and her history of chasing geese into the river was moot because we had not seen any geese.

I would stop the golf cart and the girls would pick up sticks from the recent storm and throw them in the river.  All of a sudden we look up and Elli who we affectionately call box of rocks darts for the river's edge where a flock of geese had been feeding on the shore grass, and like clock work Eli jumps into the river as all three of us scream at her to come here.....she ignores us and swims into the middle of the river where the geese do their usual tactic when a predator is swimming after them, they fly upstream of the predator and squawk at the dog.  Of course she ignores our yells and flips her body around to face the upstream geese and just dog paddles in place still ignoring us as the geese get within five feet of her as she stupidly exhausts herself and then just starts floating down the river.  Each of the major islands are a little shy of a mile long and we rush to where we can coax her out, but when we get to the point, I take my binoculars and scan the surface of the water and only see geese as they float down past a public park.

The youngest granddaughter just loses it because she also saw that she was no longer on the surface and the oldest granddaughter just gets quiet.  So we leave the property and go over to the park where a suspicious guy sees us calling the dog and then slips into the woods.  The rule in farm country is shoot a dog first and ask questions later.  So now both girls are crying and I have to call my wife at her breakfast club, and ask her if she can drive our golf cart around town and along the river's edge calling for the dog.  The youngest granddaughter is crying in the bedroom and the oldest and Mrs. Seaoat have begun the town search, but I am in agreement with the youngest.....the dog went under among the geese.   I will keep you updated, but I am really tired of all the chit landing on my head.....instead of a pleasant memory with papa, we have a nightmare brewing.  Here are the girls and dogs earlier when we were having a blast playing: 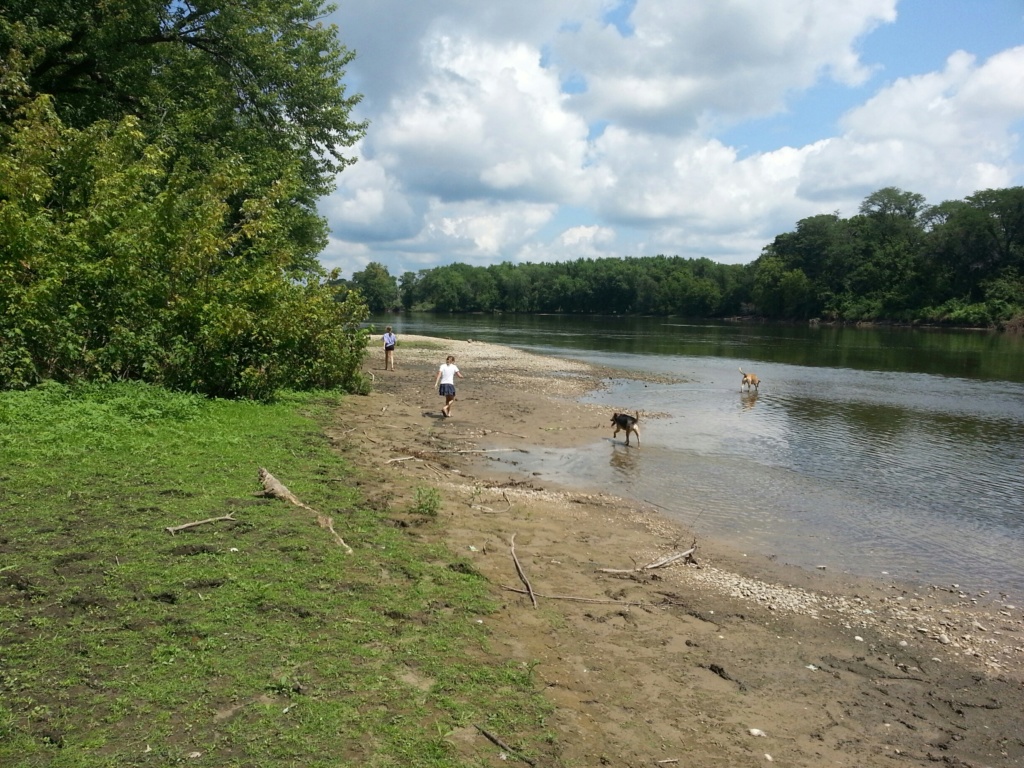 Posts : 36130
Join date : 2012-08-30
Mrs. Seaoat has a kayak group which was suppose to go on a four mile ride, but now she is in the kayak going down river. She went through town and talked to some boaters who saw box of rocks chasing the geese about a half mile from our islands. So it appears that she did not go under and was last seen floating down the river with the geese honking at her......At least Mrs. Seaoat got to Kayak, and the girls now have hope after hearing about the boaters spotting box of rocks still above surface. The dog absolutely loves running free and jumps and jumps on my daughter when she thinks she is coming to the islands, but now if she survives she will lose her freedom. Our dog played with the girls and box of rocks went looking for squirrel kills.......and the much smarter geese.

Posts : 36130
Join date : 2012-08-30
Box of Rocks located two miles down stream. Kayak was landed and dog LEASHED is being brought back to the house as I post. Girls are all smiles, and a nightmare barely avoided. I will debrief the wife as to where she was, but the dog probably will be bringing her boyfriend the goose back to the house......freedom is earned, and she just blew it. Limited runs and no more main channel freedom. Lock down......there is no way to change her behavior with geese, yet our dog catches geese and never jumps into the river to swim after them. The girls will remember this incident, and I will get a lecture from my daughter who insists you cannot trust Box of Rocks ever......and now I agree.

Cats on the other hand... lol.

Posts : 36130
Join date : 2012-08-30
Box of Rocks is the lighter of the two dogs.....ellie and wilma, and this will be the last time they get main channel privileges. There is always someone or something which messes with paradise. 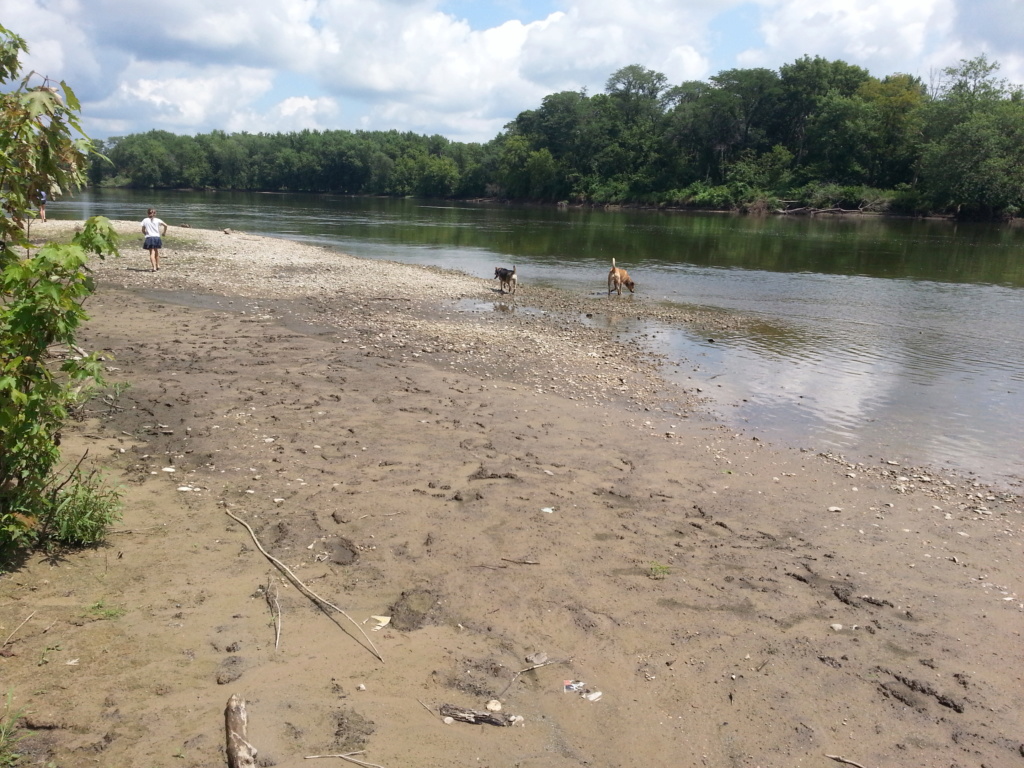 And you must now be exhausted - hope you can get some rest.

Posts : 36130
Join date : 2012-08-30
Now the youngest goes.....you know papa.....it was your fault....shame on you. Damn am I glad Mrs. Seaoat saved the day. I have never seen two more talkative girls as they are so relieved that their dog was found. My wife is rolling with laughter that the youngest is blaming me, and when my wife called the daughter to give her an update on the adventure today, my daughter goes.....you know dad should not be with the dogs without you. To my wife's credit she responded, that she was with me the last two times the dog did this chasing geese. All I thought today was going to be was another monopoly game and then playing some poker, and instead box of rocks upsets the apple cart....at least I am still alive, but we were having such a peaceful time.

Posts : 6278
Join date : 2012-06-14
Location : Pensacola Beach, FL
Peaceful indeed, or it sure sounded so. You definitely didn't need the stress and strain, and you especially didn't need anyone blaming you for what clearly wasn't your fault (seems as if that younger one could use a little modicum of empathy).

Now of course you'll defend the grandkids and that's fine. I wouldn't expect any less.

Tomorrow is another day...may it be a better one all around.

Posts : 36130
Join date : 2012-08-30
It is fun when you get your swagger in Poker. I have not had the same for about three years. I have become a very average player. I probably will never see a final table again, let alone win a tournament. That is a nice little supplement to retirement income........I love it when things are going good.

Posts : 4389
Join date : 2017-02-06
It's just fun to compete. But I'm going to need a new casino soon. I wish that you were still able to play. The Chicago tourns are coming up. I'm going to try pickle ball this winter. Hopefully i can do it without aggravating something... but it's unlikely. I sure miss the physical challenge. Dems da breaks.

Posts : 36130
Join date : 2012-08-30
I would love to enter the tournament, but I can hardly last an hour playing cards. I am thankful still to be able to do this because nobody really knows how bad it got in June. If the PRRT is killing tumors, then who knows, but the disease has advanced so much, that something I enjoyed a year ago.....a poker tournament......is too challenging.

2seaoat wrote:nobody really knows how bad it got in June.

You did try to tell us, as I recall -- but I'm sure we still have no real clue.

Re: Things sure can go to chit in a hurry