McCain attacks Putin in a letter to Russians...


President Putin claims his purpose is to restore Russia to greatness at home and among the nations of the world. But by what measure has he restored your greatness? He has given you an economy that is based almost entirely on a few natural resources that will rise and fall with those commodities. Its riches will not last. And, while they do, they will be mostly in the possession of the corrupt and powerful few. Capital is fleeing Russia, which - lacking rule of law and a broad-based economy - is considered too risky for investment and entrepreneurism. He has given you a political system that is sustained by corruption and repression and isn't strong enough to tolerate dissent.

How has he strengthened Russia's international stature? By allying Russia with some of the world's most offensive and threatening tyrannies. By supporting a Syrian regime that is murdering tens of thousands of its own people to remain in power and by blocking the United Nations from even condemning its atrocities. By refusing to consider the massacre of innocents, the plight of millions of refugees, the growing prospect of a conflagration that engulfs other countries in its flames an appropriate subject for the world's attention. He is not enhancing Russia's global reputation. He is destroying it. He has made her a friend to tyrants and an enemy to the oppressed, and untrusted by nations that seek to build a safer, more peaceful and prosperous world. 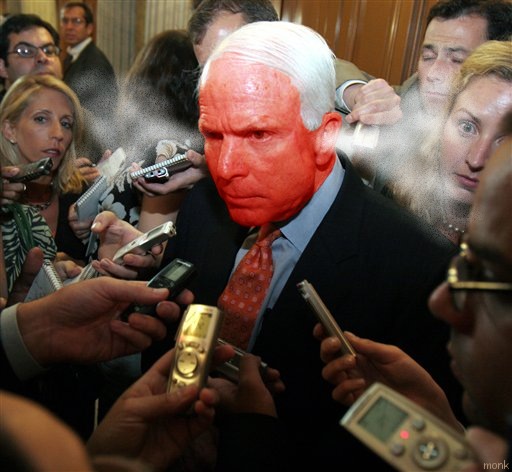 Posts : 36130
Join date : 2012-08-30
It is all silliness.   I heard on the radio that the Russians paid close to a million dollars to have a PR firm write Putin's letter.   Yet, it had the desired effect as even folks on this forum were complimenting how well reasoned and well written Putin was.   Just like the PR firms putting out the photos of tough guy Putin, McCain now has lost his mind and is going to try to convince the Russian people.  Most Americans just rolled their eyes at the letter(except some foolish folks on this forum who idolize Putin), and Russians will do the same in response to McCain's letter.   I voted for John, and think he is a hero, but damn........he is being foolish on this one.

McCain, a vocal proponent of increased U.S. intervention in Syria, said in an interview on CNN’s “The Lead” that he was “offended” and joked he would like to be able to write an op-ed of his own for the Russian newspaper Pravda.

McCain seemed to get his wish on Friday when the editors of Pravda told a blog affiliated with Foreign Policy magazine they’d be happy to consider an op-ed submission by the senator. McCain told reporters on Sunday that such an opinion piece is currently in the works.

The only problem? McCain is working with the wrong Pravda.

The Pravda that McCain had in mind is one of the oldest Russian newspapers, founded in 1912. Pravda, which means “the truth” in Russian, became the biggest newspaper during the Soviet period of Russian history. It was the official mouthpiece of the Central Committee of the Russian Communist Party. The newspaper was closed down after the collapse of the Soviet Union in 1991, then reopened in 1997 as the official paper of the Russian Communist Party. The current Pravda has considerably smaller circulation compared to its Soviet glory days.

The editors of that paper denied they had any plans to publish a McCain op-ed.

Pravda.ru, which McCain is in talks with through Foreign Policy magazine, is an electronic news website founded in 1999. Even though the website also bears the name Pravda, it is not connected to Pravda newspaper. The website has English and Russian editions and covers everything from politics to fashion and celebrities.

The online publication, Pravda.ru, for its part confirmed to CNN that it is talking with the Republican senator, saying in a statement, “We have not received the column from Mr. McCain yet, but the people from his administration said that he would have it ready in the next couple of days. We said that we would accept his column and publish it, because it is vital for us to present different points of view. He accepted, and the piece is going to appear soon. “

Asked on Sunday whether he was clear on which Pravda he was writing for, McCain told reporters, “I hope it's Pravda the Communist publication.”

2seaoat wrote: I heard on the radio that the Russians paid close to a million dollars to have a PR firm write Putin's letter.

Give me a hundred clams and I'll write letters for Putin, Obama, and Bush. And I'll throw another one in free of charge for Anthony Weiner.
And I can promise you this. They'll all have so much goddamn profanity in them that it will make Andrew Dice Clay blush.

Guest
McCain's a stupidass trying to be relevant all the time. Thank God he lost the election.

Re: McCain attacks Putin in a letter to Russians...

» Putin burning food as Russians are having food shortages
» Semi-retired President Barack Hussein Obama threatens President Putin with a sternly written letter if he doesn't allow the downed airliner to be investigated
» DONALD TRUMP SPEAKING ABOUT JOHN MCCAIN IN 2000 WHEN MCCAIN WAS RUNNING FOR PRESIDENT
» General says lets start killing Russians...lots of Russians....
» Great letter in Chi-Town! Letter: Protesters, Trump is the least of your worries