On Thursday, America was graced with a gloating op-ed from Florida Gov. Ron DeSantis in The Wall Street Journal explaining how “the elites”—meaning, apparently, everyone who ever took a biology course in high school—were so, so wrong when they tried to slow down the spread of COVID-19 and he was absolutely right to encourage parties on the beach. On the same day, Politico staffer Michael Kruse added a coat of finest boot polish with a second editorial insisting that DeSantis “won the pandemic” because “Florida has fared no worse … than other states.”

DeSantis is not just taking a victory lap over a course paved with 32,000 dead Floridians, he’s doing so at a time when his state is still logging 5,000 new cases of COVID-19 a day (second highest in the nation). That’s over twice the level Florida was reporting last fall right before it experienced the sharpest surge of the whole pandemic. So yes, lauding DeSantis is premature. Yes, it’s hideously ugly and insensitive—not just to the families of the dead, but to the hundreds of thousands of Floridians left with long-term damage from COVID-19.

But there is something that really should be earning DeSantis the admiration of Republicans everywhere. Because while New York nursing home numbers may be getting national attention, the truth is we have not a #$%ing clue about what actually happened in Florida. That’s because no one, in no other state, has done more to cover up the facts of the pandemic than Ron DeSantis.

Going into the pandemic, Florida had a system that mirrored that of many states. At the county level, medical examiners tallied both the numbers and the cause of death. This information was both made available to the public and sent to the state. By no coincidence at all, one of DeSantis’ first moves during the pandemic was to stop county officials from making these numbers public. Starting in March 2020, county medical examiners were forbidden from revealing the numbers or cause of death, and instead told to report their information only to the state.

If this sounds like it wouldn’t make much difference, in April there was a strange spike in “pneumonia deaths” in Florida—a spike that existed nowhere else. The official Florida site blamed these deaths, when they were given any cause at all, on flu. This was happening at a point when flu numbers were already way down in other states, but COVID-19 deaths were on the rise. Right from the beginning, to believe DeSantis means that Florida was having an absolutely unique experience in which COVID-19 was less deadly than anywhere else in the nation, but they were plagued by a mysterious, unconnected rash of respiratory illness.

And then there was just how those Florida numbers on COVID-19 were getting to the public. Data scientist Dr. Rebekah Jones was hired to create a dashboard for the state where the official numbers could be displayed. But in May, Jones was fired from that position after she was told to “manually change data to drum up support for the plan to reopen.” At that time, when “only” 2,000 people had died in Florida, DeSantis was already taking a victory lap around the state, claiming to have defeated the coronavirus without making spring breakers set down a single Heineken.

By then, the state’s medical examiners were up in arms over the differences between what they were seeing and what the state was reporting. They called the DeSantis numbers “a sham” and pointed out that the number of respiratory deaths the state was shoveling into the pneumonia category, with no mention of COVID-19, was the highest in at least five years. As the South Florida Sun Sentinel reported, the sharp increase in pneumonia deaths “alters the fundamental narrative of the coronavirus outbreak in Florida: This pandemic started earlier and has been broader, deadlier and more rampant than previously known.” When the Miami Herald managed to get their hands on data from medical examiners, they found it “riddled with holes.”

It also became clear that not only was Florida not taking any responsibility for tourists who came there, shared coronavirus on the beach, and returned home to deliver their virus souvenir to family and friends, it wasn’t counting the people who died in Florida if they were from out of state. That didn’t just include those who dropped in for a few weeks, it included “snowbirds” who spend a good part of the year at Florida homes. People who lived in Florida, got sick in Florida, and died in Florida did not show up on Florida’s dashboard unless they were also official residents of Florida—and even then, the odds that they might have been left off seem high.

By June, Jones was tweeting out claims that DeSantis’ government was covering up increasing hospitalization rates and had manually deleted at least 1,200 cases of COVID-19 in order to artificially meet guidelines that allowed for more rapid reopening in advance of the July 4 holiday. Jones then created her own website to give Florida a better idea of what was actually happening, including showing available hospital beds and ICU beds—information that DeSantis had stripped from the official site.

Almost immediately, Jones came under attack with claims that she had “illegally accessed” data—data that should have been public in the first place. She was repeatedly harassed by state officials and her attempts to provide more accurate data were blocked by a tightening of security around data that DeSantis, unlike every previous administration, claimed to be private. This culminated in a Dec. 7 raid on Jones’ home by Florida state police who carried off the computers used for her alternative data site. The action was egregious enough that, as the Tampa Bay Times reported, a lifelong Republican attorney who had been appointed to a judicial nominating commission by DeSantis resigned his position, saying that he want to call attention to how Florida was blocking “public access to truthful data.”

The truth about Florida is … we don’t know the truth about Florida. We do know that DeSantis has behaved recklessly and irresponsibly, that he has defied medical advice, used authoritarian tactics to hide information, and sold vaccine access to the highest bidder while denying vaccine to communities of color.

But even if the information that is currently out there were perfectly accurate … how is it a “win?” Yes, “Florida has fared no worse” than some other states … if by that Politico means those states that were unfortunate enough to be caught in the blast of the initial surge at a time when there were neither available tests nor information about how to treat COVID-19. Florida is squarely in the middle of the list of states on both deaths by population and cases by population. If it’s done better than about half the states, it’s done worse than the others. That includes running a worse rate of both deaths and cases than California. Just looking up the Atlantic coast, the rate of deaths in Florida is 27% higher than in Virginia and 36% higher than in North Carolina. Hell, it’s 180% higher than in Maine.

What exactly is supposed to represent a “win” here? Is DeSantis supposed to be given accolades because Florida didn’t slip beneath the sea under the weight of all the dead bodies? Republicans aren’t just ready to hand DeSantis a participation trophy, they’re trying to turn it into a blue ribbon. 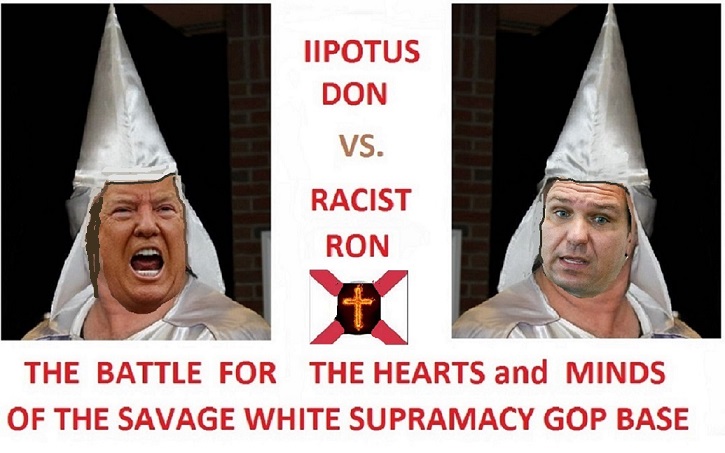 Re: Racist Ron DeSantis Wants Props For Covering Up COVID Deaths And Data

»  Eight Times Racist Ron DeSantis "Accidntally" Did Racist Stuff
» Civilian deaths on 9-11 versus mil deaths avenging 9-11
» Gun deaths in America will soon exceed Auto deaths
» More climate and weather change data....in the business world this gets someone jailed for data manipulation
» Clinton data unsecured for over a month after it was determined classified data was discovered