6 Dr. Seuss Books Won't Be Published Because Of Racist Images 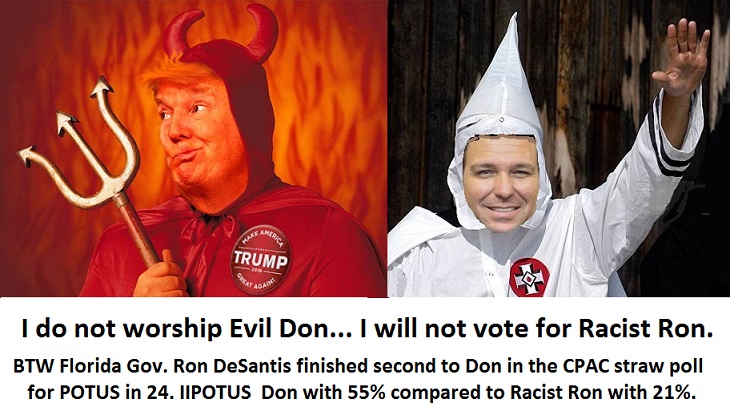 Posts : 2186
Join date : 2017-04-21
Yeah, that's dumb. Making them unavailable is not, in any way shape or form, going to eliminate racism. I can see maybe adding a disclaimer to the front of the book warning that they're a product of their time and some images don't meet current standards, but... you're never helping things by making things unavailable. And it won't make anyone a racist to read 'em. I've got copies of The Bible (and the Koran and the Book of Mormon and The Satanic Bible and several Buddhist works, etc.) and I'm an atheist who thinks all that stuff's ridiculous. But, it's still something to study in order to understand other people. Likewise, I'm anti-racist and not right-wing but I have a copy of Mein Kampf and even The Turner Diaries, because I want to know my enemy. To know what you're fighting you have to get nasty and read what they read, watch what they watch, just like if you're planning to hunt deer you've got to know what they eat, where they get it, gotta know where they sleep, how they live, how they mate... otherwise you aren't hunting, you're just walking in the woods.

So, nope, not for banning Dr. Seuss. Putting a disclaimer, sure. Maybe binding them all in one volume as "The Controversial Seuss" so they're not scattered out there for people who'd rather keep them away from their kids, okay. But ceasing publication? Nah.

I see what's offensive about certain movies. Song of the South, for instance. The B'rer Rabbit cartoon sections are some of Disney's best work, and Uncle Remus is certainly a lovable and positive character... but the overall image of slavery as a happy fun time for everybody is deeply offensive. I can see maybe not wanting your kid to see it. Making it unavailable, though? Nah.

When they put the old Warner Brothers cartoons out, there were some "problematic" elements. They still released them, but with a warning and a prologue discussing how they were products of their time. That was appropriate. But, they're available. Hell, even craaaaaazy-offensive cartoons like "Scrub Me Mama With A Boogie Beat" are still out there, and that one's so fucking bigoty-ass that even our resident Nazi-defending piece of shit anti-Antifa doesn't-even-realize-he's-a-bigot on this board would probably be shocked by it. But ya gotta see it so ya know that, yeah, at one time that shit was considered not only acceptable but "funny." Without it, you just play into the hands of people who wanna say racism was "never that bad." Find a certain Bugs Bunny cartoon made during WWII -- Bugs Bunny Nips the Nips. WOW, will that thing hip you to some racist shit that was going on. I mean, yeah, Japan was the enemy at the time, but Bugs handing 'em picnic baskets full of dynamite and saying, "Here ya go, slant-eyes!" is really fucking hard to take. But, it happened. Not letting people see that just denies part of history. It'd be wrong to celebrate it, but stuffing it in a closet and locking it up is no good, either.

I know people who won't read H. P. Lovecraft because he was a racist. I'm all about some Lovecraft... although the man, himself, was a piece of shit. No denying it. Not excusing it. Is "Shadow Over Innsmouth" still a great story? Absolutely it is. Was Lovecraft himself a scumbag? Absolutely he was. You can acknowledge both things at the same time. It's not that complicated. Roman Polanski is a pedophile scumbag who probably should be shot in the face. I won't mind at all if someone does. Repulsion and Rosemary's Baby and The Tenant are still masterpieces.

Dr. Seuss did some reaaaaaally racist drawings during WWII. It wasn't just "people weren't as enlightened back then as they are now" -- it was just racist. But, he acknowledged that he did some bad things that were wrong. That's important to keep in mind. He also did some things that were against racism. "The Sneeches" is an anti-racist story. So, ya don't dismiss somebody because they're only 80% enlightened and still 20% fucked up. Ya try to focus on the good and help them work on what's still wrong. Otherwise you just end up with more enemies.

Posts : 4616
Join date : 2017-02-06
I can understand a parent censoring content... maybe even a warning sticker... but this cancel culture crap is over the top. For fucks sake they took away Elmer Fudd's gun. Gawd knows the coyote is a violent predator... but who here has ordered a kill kit from acme? What I do think is that this "thinking" is heading somewhere... and it's not going to be a good place ultimately.

Posts : 9821
Join date : 2012-06-14
What the hell, if I can forgive the asswipes that kept posting Obama as a witch doctor just a few short years ago I guess I can forgive these from decades ago.


You won't find Song of the South on youtube any more.

This was a business decision made be a private estate - you know, free enterprise.

You’d think this would be something glibertarian heroes would support, but that would require some semblance of a coherent belief system.

I guess they’re just upset that some of the only literature they’re capable of fully digesting is being taken off the market.


'Read Across America Day,' once synonymous with Dr. Seuss, is diversifying. Here's why things have changed.
Elinor Aspegren
USA TODAY


Monday marks the start of National Reading Month – with celebrations across the nation planned for Read Across America Day on Tuesday.

The day will look a little different this year as many students learn virtually amid the COVID-19 pandemic. But the National Education Association has planned a variety of virtual events – not just in March but all year – to mark the occasion.

That's not the only difference: The NEA has pivoted from popular children's author Dr. Seuss to a focus on diverse children's books, a decision that has generated controversy on social media.

While President Joe Biden noted in his Read Across America Day presidential proclamation that “for many Americans, the path to literacy begins with story time in their school classroom” – and that the day was an important recommitment to the goal of national reading comprehension – he differed from Presidents Donald Trump and Barack Obama in leaving out Dr. Seuss's name.

Meanwhile on Tuesday, Dr. Seuss Enterprises said it would stop printing six books because of racist and insensitive imagery.

Since its conception, the annual reading day has been held on or near March 2, which is Dr. Seuss's birthday. This year, it will be held on his 117th birthday. And for many Americans, Read Across America Day is celebrated alongside his birthday.

Until 2019, when its contract ended, the NEA had partnered with Dr. Seuss Enterprises.

“One of the reasons we partnered with Seuss 20 years ago in 1997 was to kick-start this program,” NEA spokesman Steven Grant told the School Library Journal in 2017. “That was the strategy up front, so kids would see Dr. Seuss’s 'Cat in the Hat' and spark some attention.”

“It's not about reading or not reading certain books, it’s about raising awareness around the social and systemic bias that such books promote,” Stephens said in 2017. “Dr. Seuss and whiteness is a reflection of the overwhelming silence in literacy regarding matters of race, especially with both young people and white people.”

Dr. Seuss Enterprises, the business that preserves and protects the author's legacy, said Tuesday that it would stop publishing six books because of racist and insensitive imagery. 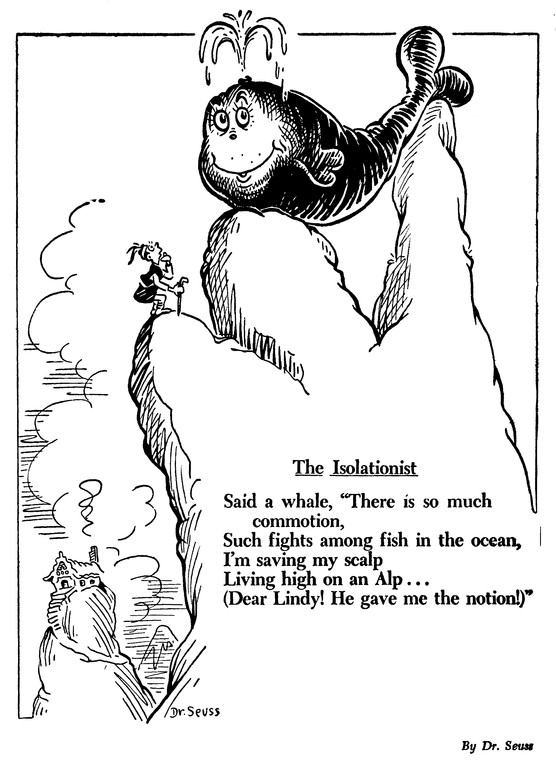 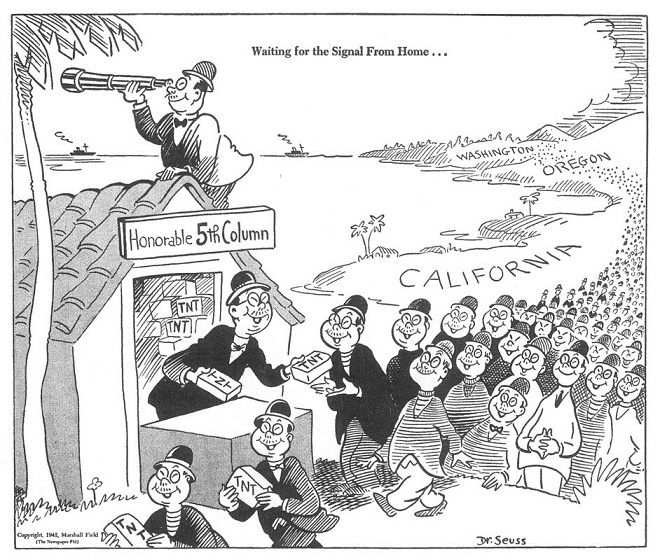 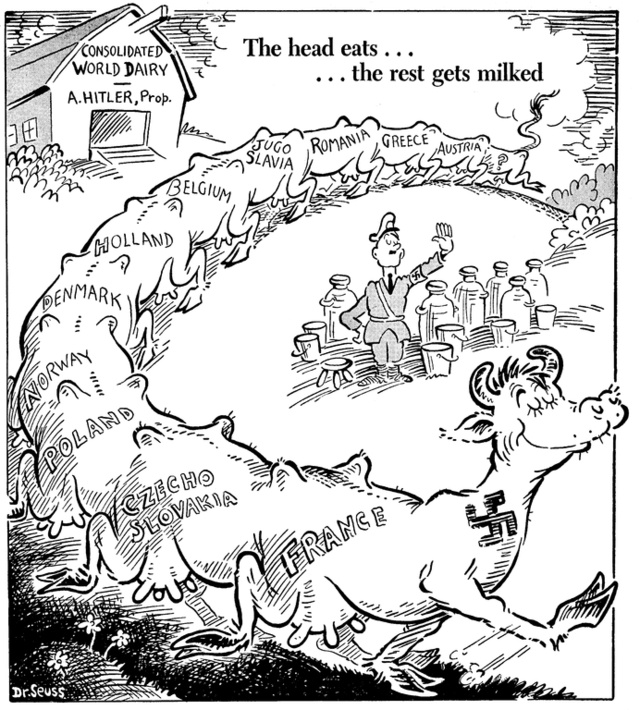 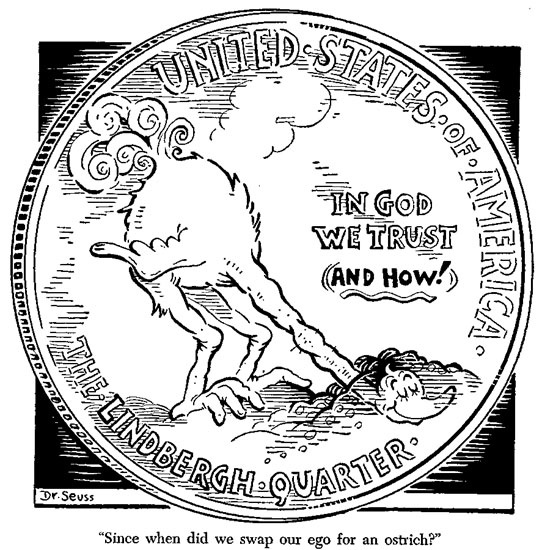 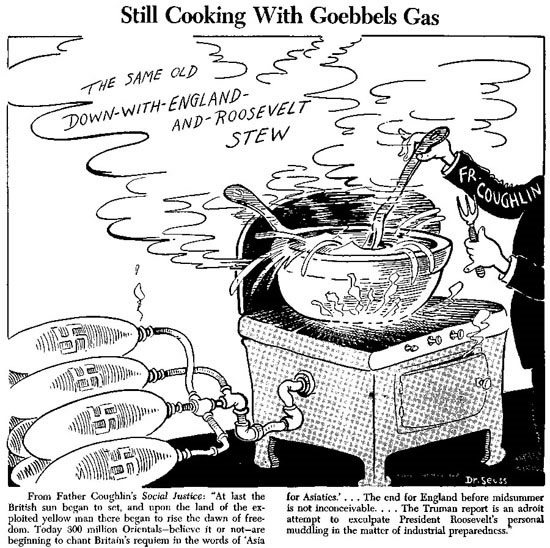 Posts : 15052
Join date : 2010-07-10
Age : 70
OMG. OMG. OMG.  This is some of the stupidest crap I've seen since Ted Cruz read Green Eggs & Ham on the Senate floor and DIDN'T UNDERSTAND IT!!!!
I read Dr. Seuss books to my brother in the '60's.  I still read Dr. Seuss with my grandson.  He loves Green Eggs & Ham and it encourages him to try new foods.  There's also a Green Eggs & Ham series on Netflix, which he likes to watch and act out the parts of the characters.  And I read Dr. Seuss' biography DR. SEUSS & MR. GEISEL A Biography by Judith & Neil Morgan c. 1995, which is available from the Library of Congress.  I still have my copy, and I highly recommend it.

Meanwhile, FOX in SUCKS is promoting "cancel culture" based on the publisher's decision to stop offering 6 books which might be deemed offensive.
I don't really think Theodor Geisel was a racist...more a product of the times and his focus on WWII.

Why Fox News is focused on Dr. Seuss instead of the Covid stimulus bill

Cancel culture hasn't come for Dr. Seuss. But Republicans want their base to think it has.

Re: 6 Dr. Seuss Books Won't Be Published Because Of Racist Images