To the contrary, *resident Trump has found time to visit his properties hundreds of times while in office, with time left over to lavish them with praise in official remarks, and to reward his paying customers with privileged access to and positions in his administration. For nearly four years now, *resident Trump has made it abundantly clear that any claim of separation from his business was a lie, and coupled with his unprecedented decision not to divest his business empire before entering office, this empty promise has led to some of the most egregious examples of presidential corruption and conflicts of interest ever raised by a modern president.

Since day one, CREW has been tracking *resident Trump’s conflicts of interest, showing how the line between the Trump Organization and the Trump administration has blurred so much that it is unclear where *resident Trump’s public responsibilities end and his private financial interests begin. Unlike any other modern president, Trump has forced the American people to ask if the decisions and policies his administration is implementing are because they’re the best policies for the nation, or because they personally benefit him — either by helping his businesses directly or the special interests spending money there. 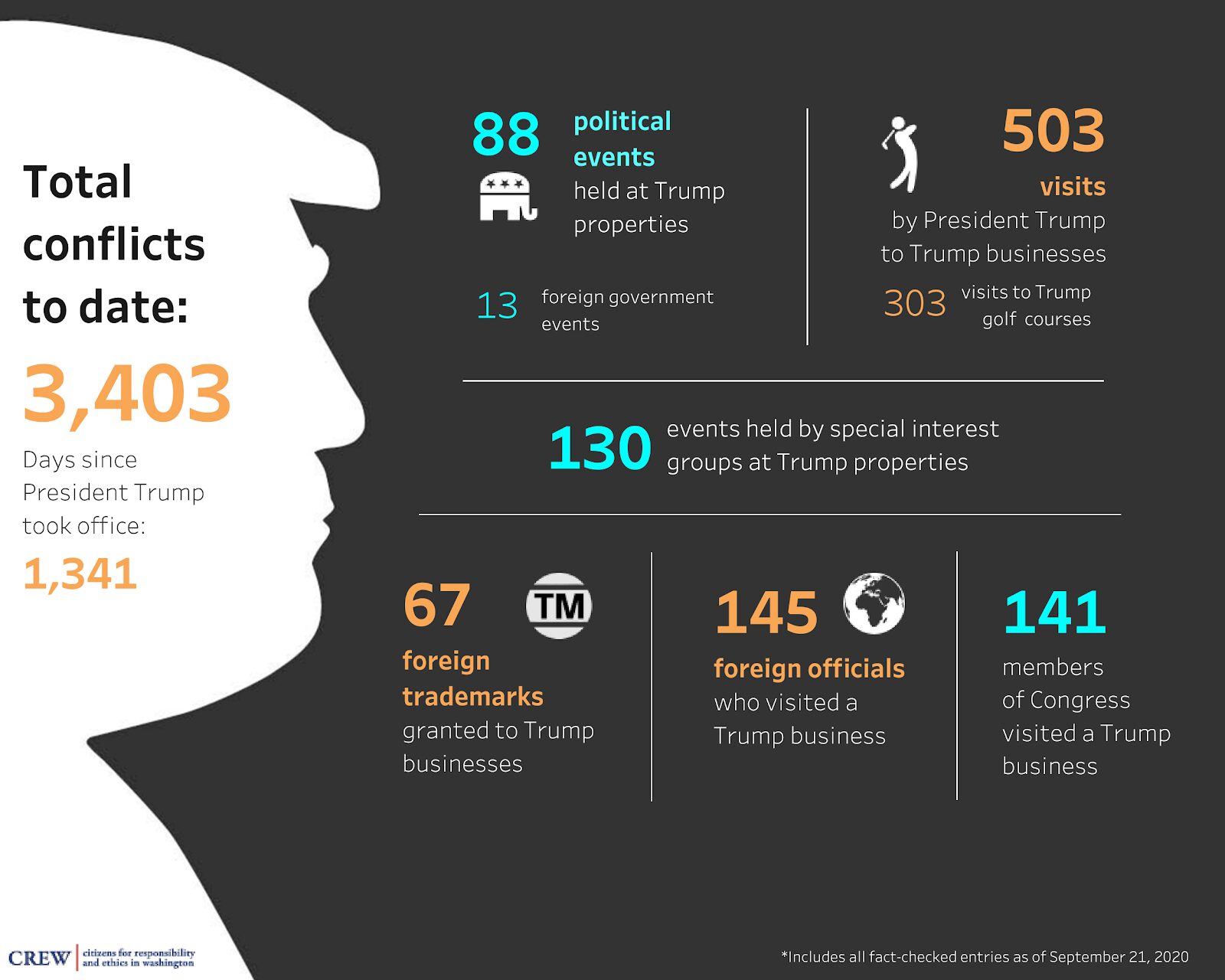 The New York Times’ damning report on the president’s taxes shows just a fraction of his financial woes. And Wall Street bankers have serious doubts about whether he can dig himself out. 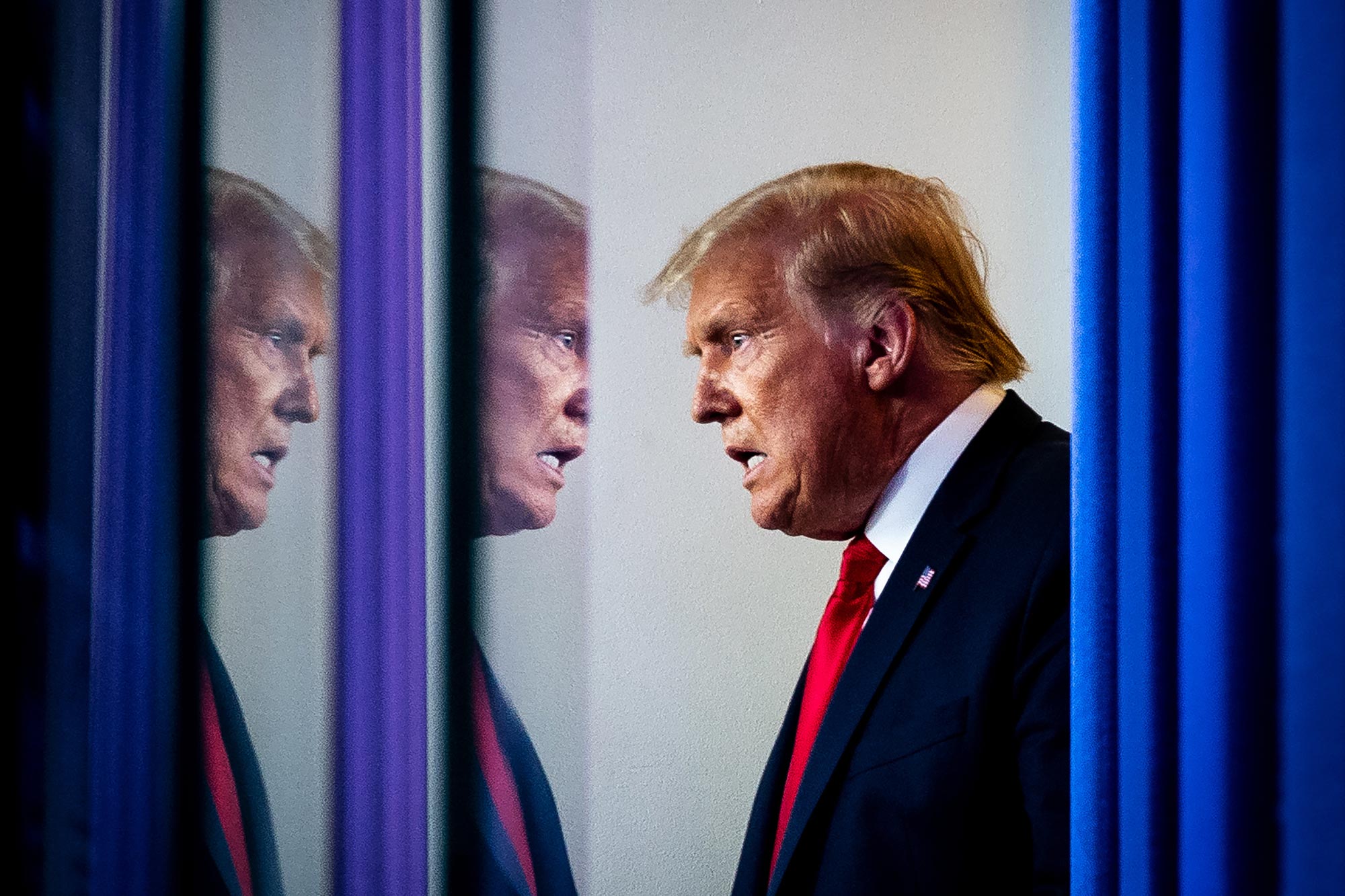 
Well, that was certainly one way to knock the devastating New York Times bombshell story of Donald Trump, tax cheat, off front pages and out of television control rooms. Even so, Chris Wallace, the beleaguered debate moderator, did manage to ask Trump whether it was in fact true that he had paid just $750 in federal income taxes for both 2016 and 2017, as the Times reported. Trump’s answer, which was most certainly a lie? That he paid “millions of dollars” in federal taxes in those years. (I know it’s a lie because (1) Trump is a proven liar, and (2) I have known Susanne Craig, one of the reporters on the Times story, for years and know her to be a meticulous, exacting, and responsible journalist. If she didn’t have the goods, the story would not have been printed.) In the ongoing brawl of the evening, Trump also repeated another of his favorite lies: that “soon” enough we’ll see his tax returns for ourselves. Yeah, right.

But what of the substance of the Times’ reporting? Leaving aside the moral question of whether the president should pay nothing in federal taxes while everyone else pays their fair share, and then lie about that fact on national television, what about the substance of the idea that a sole proprietor—what Trump was as a businessman—who suffers huge losses by running his businesses poorly—which certainly appears to be the case—can use those losses to shelter gains for tax purposes? That is indeed a long-accepted tax principal. Business losses can be carried back to offset profits earned in previous years, generating a tax refund in the process, or they can be used to offset future profits. This is almost certainly what Trump has been doing, my savvy Wall Street sources tell me.

What’s clear from both the Times’ reporting and other reporting over the years, including some of my own, is that Trump has two pockets of huge losses: one from driving his casinos into bankruptcy during the 1990s, and one from the poor operation of his golf courses (according to the Times, losses at Doral have come out to $162 million, and his three courses in Scotland and Ireland have lost another $64 million) and his few remaining hotels (the Washington Trump International Hotel has lost $55 million, according to the Times). One of his main sources of profit, apparently, has been from his involvement with The Apprentice, which, the Times reported, made him more than $427 million. What would make sense, from a tax perspective, is his using the losses incurred from his casinos, golf courses, and hotels to offset his gains from The Apprentice. Obviously the devil is in the details, but at least in theory this is not crazy.

Some of his other shenanigans—among them the $70,000 deduction for hair styling, the $750,000 or so deduction for pretending Ivanka was a consultant at the same time she was an employee of the Trump Organization—are more questionable. He also apparently has a long-running dispute with the IRS over a $72.9 million refund the IRS sent him that it wants back. If Trump comes out on the losing side, he could owe interest on the refund as well, bringing the total owed to the IRS to around $100 million. Who knows if he has this kind of money lying around.

The Times article, though, raises an even more important question: whether Trump is solvent and might be facing personal bankruptcy. The Times reported that “within the next four years,” Trump has “more than $300 million in loans” coming due for which he is personally responsible because he guaranteed them. But that is only a fraction of the more than $1.1 billion or so in debt and obligations that Trump owes across his empire, my calculations show. There’s Trump Tower on Fifth Avenue, which Trump owns and which has $100 million of debt on it, due in 2022. On 40 Wall Street in Lower Manhattan, which Trump also owns outright, he owes another $139 million, due in five years. He also owns 30% stakes, alongside Vornado Realty Trust, in two office towers: one in Manhattan at 1290 Avenue of the Americas, and one in San Francisco at 555 California Street. His 30% of the debt on these two buildings, according to the Vornado filings with the Securities and Exchange Commission, is $448 million—$163 million of which is due next September, with the balance of $285 million due in two years. (If you are still with me, we’re up to $687 million in debt.)

His beloved Doral, in Miami, where he wanted to hold the next G7 meeting before that idea got nixed, has $125 million in debt on it in the form of two mortgages, both due in 2023. On his Trump International Hotel, down the street from the White House and which rated a brief mention Tuesday night, Trump owes another $160 million, according to the Times. (The original mortgage was $170 million, suggesting that he might have made a $10 million payment on the principal.) In any event, Trump has put it up for sale. With these two properties, Trump’s debt, in our running tab, is up to $972 million.

Then it gets a bit more complicated and the numbers a bit smaller. But thanks to Dan Alexander, the Forbes Trumpologist and the author of new book White House, Inc., we can account for another $100 million or so, bringing the total debt that Trump owes to around $1.1 billion—well beyond the $421 million of debt the Times shared in its piece.

Whether he’s good for it remains to be seen. The Wall Street bankers I speak with have their serious doubts. There are many reasons. First and foremost, as has been the case for many years, there is little chance any Wall Street bank will refinance any of Trump’s loans as they come due. He’s been a toxic credit for years, and that toxicity has only increased during his presidency. What bank would want to take on the headache of deciding whether to foreclose on the sitting (or former) president of the United States? None.

While a big question posed in the Times article was to whom Trump owes all this money, the truth is we know that the originators of the bulk of these loans have been Deutsche Bank, as has been well documented, and Ladder Capital, a less well known, publicly traded underwriter and syndicator of mortgage-backed securities. (Market value of Ladder: $860 million.) As they say on Wall Street, both Deutsche Bank and Ladder Capital are in the moving business, not the storage business, meaning these Trump loans have, by now, probably been widely syndicated to investors, perhaps around the world. In other words, the owners of these loans are everywhere and nowhere. Trump’s best option would be to try to organize these investors into a group and attempt to amend and extend the terms of the loans before they come due and swallow him whole. While this is exceedingly hard to do with widely syndicated loans and securities, it’s not impossible, and it’s something Trump’s sons Don Jr. and Eric should be trying actively to do. My guess is they probably aren’t, especially as the campaign enters its final phases. Maybe that task will fall to Jared Kushner—as do most tasks in Trumpworld—who successfully pulled a rabbit out of a hat when he refinanced, by some miracle, the overleveraged 666 Fifth Avenue.

Can Trump’s assets be sold for more than the $1.1 billion he owes, plus the considerable capital gains tax he will owe the government from the sales? (We know from the Times piece that he has availed himself of the tax-advantaged depreciation rules. “I love depreciation,” he said during a 2016 debate.) In other words, it won’t be enough for Trump to be able to pay back the debt he owes on the buildings and golf properties. He will also have to pay the capital gains tax on what are now by and large fully depreciated, low-basis assets.

That’s going to be tough. There probably has not been a worse moment in a generation to try to sell assets like Manhattan office towers, big-city hotels, and golf courses. A forced sale—which may be Trump’s only choice—will be risky. He might just squeak by even stephen if that’s the route he has to go. But being a forced seller in a distressed market is not a position you want to be in.

All of which makes Trump’s financial situation precarious indeed, and that’s before he might end up owing the IRS $100 million. But as one Wall Street senior executive tells me, the bigger fallout for Trump from the Times revelations may be political, not financial. “This election is about inches,” he says, “and every day you lose a day, it’s a bad day. There is no question that the idea that the New York Times suggested that Donald Trump only paid $750 was not a good day for Donald Trump. I’m not saying it’s going to change the election results, but he lost that day, and he probably lost the second day that the story continued. When you’re in a game of inches, any one of these stories that people can understand, like the story about his view of the military…it’s not a good day…For the average American who’s trying to make up their mind, they see a guy who claims to be a multi-multibillionaire who only pays $750 in taxes, and you’re a guy who is a fireman or a police officer and you’re paying 30-plus percent of your income in federal taxes. You say, regardless of what the rules are, ‘Is that fair?’ That’s what I think is aggravating.”