PkrBum wrote:Down goes Clinesmith... admits altering email that was used at FISA court. The plea is said to include testimony.

I'm sure nothing will ever matter... unless Trump used the same tactics. But Clinesmith was an FBI lawyer that was actually on Mueller's team. He's charged with falsifying evidence used to fraudulently obtain FISA warrants to surveil the Trump campaign. So there he was working under Mueller investigating a case where he had committed a crime to create. It's dirty... and you'd all be screaming bloody murder were the parties reversed. Supposedly he's talking per the plea and there may be a pub or two involved too. If this isn't rooted out... it's the new normal.

Barr makes first charge against someone involved in the Russia investigation 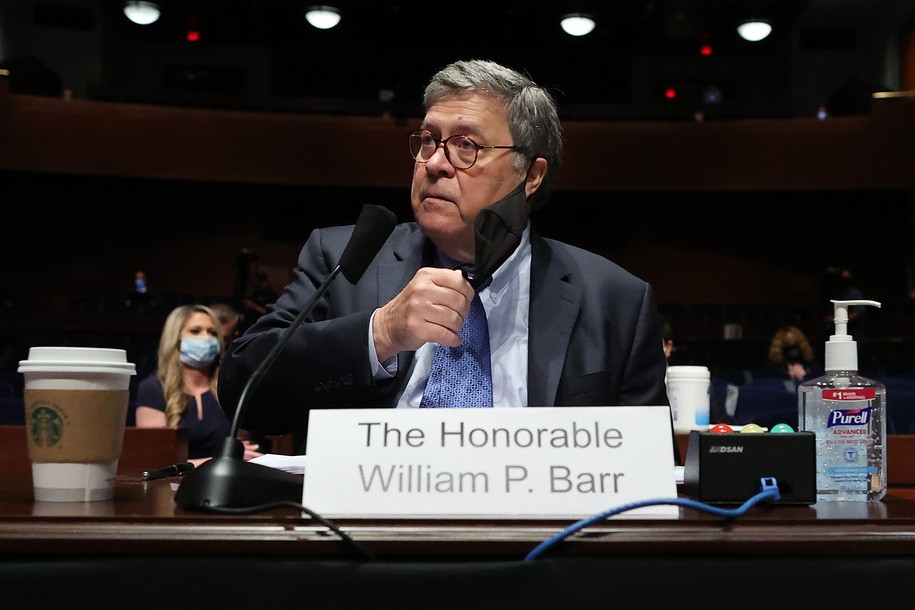 WASHINGTON, DC - JULY 28: U.S. Attorney General William Barr removes his face mask before testifying to the House Judiciary Committee in the Congressional Auditorium at the U.S. Capitol Visitors Center July 28, 2020 in Washington, DC. In his first congressional testimony in more than a year, Barr faced questions from the committee about his deployment of federal law enforcement agents to Portland, Oregon, and other cities in response to Black Lives Matter protests; his role in using federal agents to violently clear protesters from Lafayette Square near the White House last month before a photo opportunity for President Donald Trump in front of a church; his intervention in court cases involving Trump's allies Roger Stone and Michael Flynn; and other issues. (Photo by Chip Somodevilla/Getty Images)

Even before he arrived to be Donald Trump’s personal attorney general, William Barr engaged in attacks against the Department of Justice investigation into Russian involvement in the 2016 election. Shortly after his approval by Senate Republicans, he appointed U.S. Attorney John Durham to begin an investigation into the investigation. After more than a year, Durham’s investigation has resulted in its first charges … sort of. Because the single charge is actually something that showed up in a review of the case by DOJ Inspector General Michael Horowitz last December.

The single charge is directed at former FBI attorney Kevin Clinesmith and concerns the FISA warrant issued for the surveillance of Carter Page. In obtaining that warrant, Clinesmith was asked to make sure that Page was not an active source for an “other government agency,” almost certainly the CIA. Clinesmith apparently obtained this assurance, but sent an email that made it appear as if the statement had come from someone at the “other agency” rather than himself. And that is the crime for which he was indicted on Friday—a crime which, according to Horowitz’s report, did not invalidate the justification for issuing a warrant against Page.

The five-page document describing the charge against Clinesmith shows that he did in fact speak with officials at the unnamed agency and learned that Page had been a source up until 2013. Clinesmith was told that Page was not currently a source—a fact that no one disputes—and provided an email that included information about Page’s past activities. When later told that the agency had to provide something in writing showing that Page was not a current source, Clinesmith inserted “and is not a source” into a portion of the email that came from the representative he spoke with at the other agency.

This information appears to represent what Clinesmith was told, but it does show that he actively altered the email, and did so in a way that made it appear as if the information had come from his contact. There’s no doubt that what Clinesmith did was wrong—and in a document used in support of a warrant, illegal—but it also doesn’t seem to have materially altered anything.

It’s certain that Durham will be back with more before the election. In fact, Barr has made it clear that sometime between now and Nov. 3, he intends to pour out everything he’s learned during a round-the-world tour that included trying to convince allied intelligence agencies to support Trump’s conspiracy theories against Barack Obama, Hillary Clinton, and Joe Biden.

It certainly "invalidated" the warrants and it's laughable to claim otherwise. You shouldn't want this to take place.

Former CIA Director John Brennan briefed former President Obama on Hillary Clinton’s “plan” to tie the Trump campaign to Russia as a means of distracting the public from her private email server scandal before the 2016 election, according to newly declassified documents.

Director of National Intelligence John Ratcliffe on Tuesday declassified Brennan’s handwritten notes along with a CIA memo showing that officials referred the alleged scheme to the FBI for potential investigation.

Brennan’s notes, which were taken after he briefed Obama on the intelligence, cite “a proposal from one of her foreign policy advisers to vilify Donald Trump by stirring up a scandal claiming interference by the Russian security service,” which was “alleged approved by Hillary Clinton.”

Former CIA Director John Brennan briefed former President Obama on Hillary Clinton’s “plan” to tie the Trump campaign to Russia as a means of distracting the public from her private email server scandal before the 2016 election, according to newly declassified documents.

Director of National Intelligence John Ratcliffe on Tuesday declassified Brennan’s handwritten notes along with a CIA memo showing that officials referred the alleged scheme to the FBI for potential investigation.

Brennan’s notes, which were taken after he briefed Obama on the intelligence, cite “a proposal from one of her foreign policy advisers to vilify Donald Trump by stirring up a scandal claiming interference by the Russian security service,” which was “alleged approved by Hillary Clinton.”

Facebook bans all QAnon groups as dangerous amid surging misinformation

SAN FRANCISCO (Reuters) - Facebook Inc FB.O on Tuesday classified the QAnon conspiracy theory movement as dangerous and began removing Facebook groups and pages as well as Instagram accounts that hold themselves out as representatives.

The step escalates an August policy that banned a third of QAnon groups here for promoting violence while allowing most to stay, albeit with content appearing less often in news feeds. Instead of relying on user reports, Facebook staff now will treat QAnon like other militarized bodies, seeking out and deleting groups and pages, the company said in a blog post here.

Since the August restrictions, some QAnon groups have added members, and others used coded language to evade detection, for example referring to “cue” instead of Q. Meanwhile, adherents have worked to integrate themselves in other groups, such as those concerned with child safety and those critical of restrictions on gatherings due to the coronavirus, according to researchers at Facebook and elsewhere.

“QAnon messaging changes very quickly and we see networks of supporters build an audience with one message and then quickly pivot to another.”

Recent QAnon posts have spread false information about voting and about COVID-19, researchers said, even claiming that President Donald Trump faked his diagnosis of COVID-19 in order to orchestrate secret arrests.

Classed as a potential source of domestic terrorism by the FBI, QAnon is driven by an anonymous internet poster nicknamed Q who claims to be a Trump administration insider. The core, nonsensical claim is that Trump is secretly leading a crackdown against an enormous pedophile ring that includes prominent Democrats and the Hollywood elite.

There has been no surge in arrests, and the fictitious Satanic rituals that the group cites echo longstanding legends used to anger people for political reasons, often against minorities.

Trump has praised the group as patriotic, and more than a dozen Republican congressional candidates have promoted it.