The first worrisome storm of the season is now here 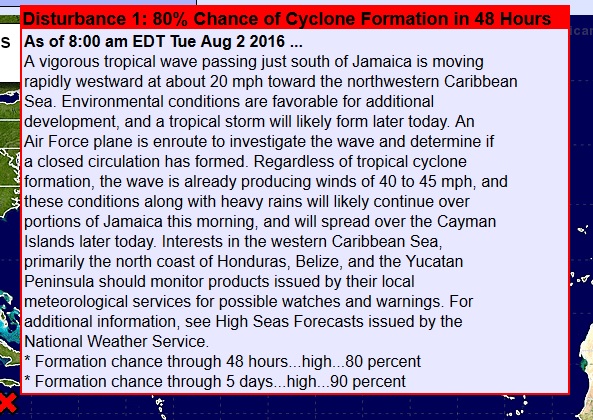 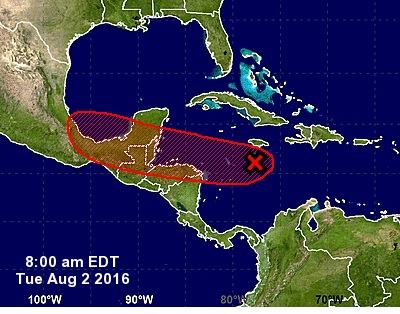 Posts : 36130
Join date : 2012-08-30
The state pocketed the extra premiums and this year I watched them spending some of the booty to buy record reinsurance for the state. It would seem to be a good bet.

RealLindaL wrote:Now a named storm with a defined center; therefore the tracking is more certain.
NOT coming here, Bob -- not to worry in the least:

The worry is only now starting and the worry won't end until mid-September. lol

RealLindaL wrote:Now a named storm with a defined center; therefore the tracking is more certain.
NOT coming here, Bob -- not to worry in the least:

The worry is only now starting and the worry won't end until mid-September.  lol

Obviously I was addressing your concern about this specific system (now Earl).   You don't have to tell me about hurricane season worries; remember, I live on Pensacola Beach.   The entire interior  -- and parts of the exterior -- of our house were trashed during Ivan and we were displaced from our home for nine stressful months, dealing with contractors and insurance adjusters and the whole mess; my husband also slipped a disc pulling down sheet rock and had to have surgery.   Then, after all was finally repaired and we had a lovely new interior, we had  been back home only about a month when along came Dennis, which blew a big hole in our front wall and did yet more damage, though this time we were "only" out for a couple of weeks.   And then a month later another evacuation, this time for Katrina, though fortunately there was no damage except for some dirty water in the garage.  But evacuations are extremely stressful and laborious in themselves and if I never see another one I'll be extremely grateful -- though I realize that's highly doubtful.

So yeah, Bob, I get it.   And being that September 10 is the climatological peak of the season, we don't relax until November in our house.

RealLindaL wrote:   And being that September 10 is the climatological peak of the season, we don't relax until November in our house.

The reason I emphasized August and September, is ordinarily those are the months which produce the really damaging hurricanes. When we get to October I breathe a sigh of relief. Not being subject to storm surge, I can withstand most of the October landfalls. But since you live on the beach, I realize lesser storms can be worrisome for you.

RealLindaL wrote:   And being that September 10 is the climatological peak of the season, we don't relax until November in our house.

The reason I emphasized August and September,  is ordinarily those are the months which produce the really damaging hurricanes.   When we get to October I breathe a sigh of relief.  Not being subject to storm surge, I can withstand most of the October landfalls.  But since you live on the beach,  I realize lesser storms can be worrisome for you.

Oh, one more hurricane story:  I didn't live here then (8/3/95), but in Hurricane Erin the entire front wall of this house was ripped off and the neighbors tell me the CNN helicopter flew around filming it as the "poster child" of the storm, looking like one big dollhouse.

Posts : 36130
Join date : 2012-08-30
Opal destroyed concrete pillars on the Navarre Pier.....however I dread the next Cat three to hit the area because I think people are burned out.....yes, it has been 10 years, but like Ivan, and then Dennis a year later, you cannot live your life with such risk. My business partner had a retired partner in his business who had moved everything to Florida and was 82 years of age.....his house was destroyed, and literally he went days without assistance from anybody, when my friend sent folks from his business in mass to save as many of the man's personal effects and get him the hell out of there. He then retired to TN, and never returned to Florida where he felt too much risk. I remember listening to the Citizen's insurance rate hearings when I learned that 25% of all homeowner insurance claims since 1900 have originated in Florida.

Posts : 22918
Join date : 2012-06-13
Location : Armpit of Florida
Yes Opal and Erin and Dennis and a host of other storms caused significant damage along the coast. But I was only speaking of my own personal risk.
I'm at 60' elevation. Water is never an issue. Only wind.

And this is what I think about wind. I now tell people that from 1956 until 2004 I never experienced a real hurricane. Opal, Erin, Dennis, Frederick and Camille were pussies where I live. I must have 20 full size pines on my property and none of them so much as lost a limb until 2004. And I think all those hurricanes together probably cost me about a half dozen roof shingles.

For 48 years I was telling people hurricanes were a fraud. But that all changed on the night of September 16, 2004. That was the big one. And since it was officially only a category 3 hurricane, I cannot even in my wildest imagination imagine what it must be like to go through a category 5 hurricane. I hope I never even experience another Ivan again.
Opal or Erin? Don't put me in scaredy cat country.

Bob wrote:But I was only speaking of my own personal risk.

Of course you were.


What? you had doubt that an early Trump supporter and a Romney supporter would have any concern for his fellow citizens.......geeeeeez, Bob has done all kinds of unselfish things, and has sacrificed for his fellow man.......he built his back yard to share with the world, served on local charitable boards, park districts, library boards, school volunteer, assisted the elderly, and worked the homeless shelters, took part in environmental clean ups, did voter registrations, and made Pensacola better, but the best part he made every effort to promote elevator music......without which America would be without a racial change agent which brought equality to black people throughout America.......and he was the best baseball coach for little Billy Pensacola has ever seen.......or were you being sarcastic?

A good friend going all the way back to high school was killed by Hurricane Ivan. Joe Greenblatt drowned when his waterfront home in Grand Lagoon was inundated by storm surge.

No it's not that I'm a selfish racist republican romney loving cracker living in the armpit who only cares about himself. lol
It's just that my hurricane risk is a lot different from Linda's. I'm on high ground and she's on the beach.

Posts : 36130
Join date : 2012-08-30
Linda is not at risk. She has a brain. She has a car. She has the option to use both. I have been in a bar in Pensacola when I could drink with this macho strange brag about staying in one's home during a hurricane. I simply do not get it. I had over 20 people stay in a house I own in Navarre who lost everything and almost their lives in Katrina hanging on to a tree holding their dog because of that macho mentality as they watched dead bodies floating in the water until the water began to retract. Some of the folks had mental breakdowns and had to be institutionalized for over a week because of that crazy macho. Again.....if you have a brain, and you have a car, a hurricane only represents property damage.....nothing should put your life at risk except misguided macho. I get poor people not having a car, but there are options for those folks if they engage their brain.

Yes, but she can't use her brain and car to move her home. You might can, but trust me us normal people don't have that capability. lol

Her risk for property damage in lesser storms is greater than mine. Can you not even grasp that concept?

Posts : 36130
Join date : 2012-08-30
I have lost $265,000 in uninsured natural disasters in the last ten years. You have not. I had no insurance available to cover those assets, and I was completely at the mercy of nature. Sometimes Nature reminds us how utterly unimportant "stuff" is, but then again you have lived your entire life all about "stuff", and sadly too much of my life was concerned about the same.....no more......I have simplified.....much less stuff, and being I have five properties on canals in Santa Rosa County, I will take a huge hit on a direct Cat 3 hurricane as each of my properties had five feet of water in Ivan over the entire length of the property. However, I know how to find a car. I would bet you put the dresser in front of the door and do your macho brag after a hurricane how you stayed in place.....stupid is hard to fix. Those same people who were wiped out in Katrina, talked about how Camille could not hurt their property, why should they leave......yep, stupid is hard to fix.

As for having uninsured property losses, unless I'm missing or misunderstanding something, who, exactly, is the stupid one in the room?

ppaca wrote:No early next week is the first worrisome event of this year. Anywhere between New Orleans and Tampa 5 to 25" of rain possibly more near Cedar Key.

Way too early to tell for sure but preliminarily it appears the far western Panhandle will not see the worst of this system.

Yep, that pretty much agrees with what I'm finding -- as accurate as anyone can be at this point with a non-formed system that's just "meandering", as the NHC terms it. Still, it appears, anyway, as if the heaviest of the precip will be east and/or southeast of us.

Re: The first worrisome storm of the season is now here