The ad, which CNBC reported will premiere on the network Thursday at 9 a.m., targets four billionaires who have been publicly critical of Warren’s plan which would add an additional tax on them based on their net worth.

“It is time for a wealth tax in America,” Warren says in the minute-long video, speaking at a campaign rally. “I’ve heard that there are some billionaires who don’t support this plan.”

“We’re Americans, we want to make these investments," she says in the ad. "All we’re saying is, when you make it big, pitch in 2 cents so everybody else gets a chance to make it."

Posts : 1838
Join date : 2017-04-21
I like Warren, but I think the "billionaire tears" mugs she's selling now are stupid. That shit was stupid when conservatives were selling them as "liberal tears mugs," and this is an obvious rip-off of that. It all comes across as childish taunting that I don't think's gonna really do anybody any good.

Besides, it just reinforces all the conservative talking points. I don't really know why conservatives (when most of their base are dirt poor) are so protective of billionaires... but, conservatives tend to be born stupid bootlickers who've been getting tricked into suffering and dying for the needs of the rich ever since the Civil War. Warren's plans won't really hurt billionaires all that much -- it's just an extra two percent. Acting like that's going to make them cry just plays into conservative idiot fears that "if you take anything from billionaires they won't create jobs anymore!" Which is fucking hogwash and always has been. Billionaires will still have plenty to reinvest in their businesses... and when you give them tax cuts they don't do anything but sock it away in savings, anyway, or invest in automation to eliminate jobs (Amazon's the freakin' king of that... if it's up to Bezos, nobody'll have a job to buy all his shit from 'im, short-sighted little lizardcreep). You can clearly see that right now -- Trump gave billionaires tax cuts and cut regulations all over the place, and the rate of job creation (and trends are what you really have to look at, not benchmarks, which are always going to go up if trends are positive) hasn't gone up any and has, in fact, slowed slightly from where it was under Obama. Those tax cuts haven't done jack, and all the cutting regulations has done is set more places up for worse water. Soon everybody'll have the kind of water they do in Flint.

Hell, run your local water through here - https://www.ewg.org/tapwater/ If you live in the South, I'll bet you've got more carcinogens than most other areas. Locally we've got a half-dozen violations and over a dozen serious contaminants. So... yay?

Anyway, adding another 2% or so onto billionaire's share of the tax so they can put something back into the system they're benefiting from isn't really going to burden them much. So the mugs are stupid and send a wrong message. I wish she'd ditch those.

Wanting to drink your enemy's bodily fluids is such a weird message to send, anyway. Like I told an acquaintance with a liberal tears mug, "Sorry I'm not crying, but I can probably give you some pee if you want." 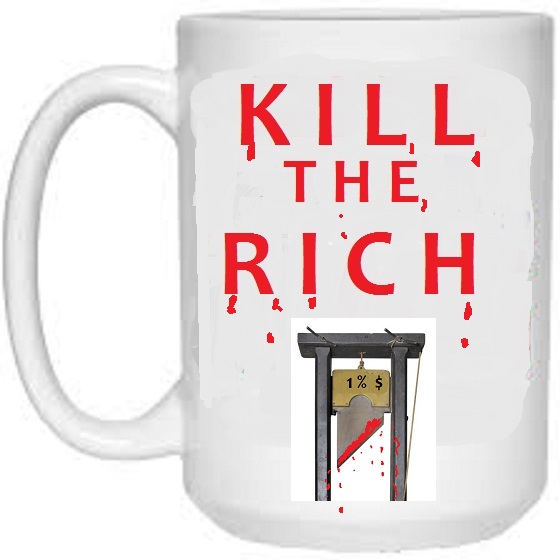 The United States has the highest income inequality in the world - even Chile is kicking our asses.

How is it that people are alright with that?

Sal wrote:Warren's message is correct - it's us versus them.

The United States has the highest income inequality in the world - even Chile is kicking our asses.

How is it that people are alright with that?

At the very least the 1% need to understand that if things don't change, they are "going to go through some tings." So sad.

Re: New Warren Add Causes Billionaires To Shit Themselves!