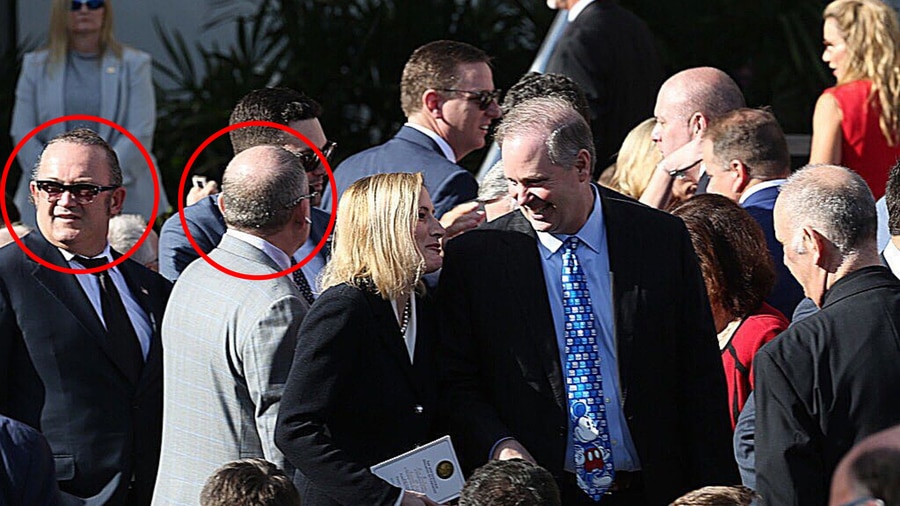 In a photo taken at Gov Ron DeSantis' Jan. 8 inauguration this year, Igor Fruman, far left and circled, one of the Soviet-born businessmen indicted on charges of interfering in U.S. elections, can be seen mingling in the VIP crowd area limited to invited guests. To his right are his partner Lev Parnas, circled, who is also indicted, and Laurel Lee, who became Florida's Secretary of State 20 days later. Sen.Wilton Simpson, R-Trilby, center, talks with Lee before the ceremony began. [SCOTT KEELER | Tampa Bay Times]

(I didn't read the article b/c I use an ad blocker).

Arrested Giuliani associates were VIPs at Ron DeSantis’ inauguration
Lev Parnas and Igor Fruman attended the January celebration and were on a special list to get seats near the front, according to an email.

By Steve Contorno
Published Oct. 25
The two Rudy Giuliani associates accused of violating federal campaign laws attended the inauguration of Gov. Ron DeSantis, suggesting the Soviet-born businessmen remained in the Republican’s orbit even after his election.

Pictures taken at the Jan. 8 inauguration by the Tampa Bay Times, and previously unpublished, show Lev Parnas and Igor Fruman mingling in an area cordoned off for an exclusive crowd of dignitaries, elected officials, lobbyists and family. They are wearing suits and sunglasses as they rub elbows with some of Florida’s most powerful people.

Their proximity to the festivities wasn’t a coincidence. In last-minute preparations before DeSantis was sworn in, the head of his inauguration team told event organizers to reserve seats near the front for a select group of people. Parnas and Fruman were on the list, according to a document obtained by the Tampa Bay Times.

A spokeswoman for DeSantis told the Times on Thursday she was aware the two men were at the inauguration. In a statement Friday, Heather Barker, the finance director for DeSantis’ political committee, said the governor, “Did not approve nor did he see the entire invitation list for the inaugural activities, the list of attendees, nor did he see the seating arrangements.”

Barker said the guest list was the “responsibility of the executive director” of the inauguration, Justin Caporale.

Caporale joined the DeSantis team in the final weeks of the gubernatorial race, brought on by Susie Wiles, the ex-Ballard Partners lobbyist who ran the campaign for the home stretch. Caporale briefly worked in the DeSantis administration but has since left. Attempts to reach Caporale on Friday were unsuccessful.

Parnas and Fruman were arrested earlier this month and are now embroiled in the impeachment investigation into President Donald Trump. Federal prosecutors have accused the two men of attempting to funnel foreign money into the 2018 U.S. elections and alleged they worked with Giuliani to oust the United States ambassador to the Ukraine.

The two men donated $50,000 to DeSantis’ campaign through a company called Global Energy Producers and Parnas hosted two fundraisers for DeSantis, the Miami Herald reported. After they were arrested, DeSantis returned the $50,000 and a spokeswoman told reporters that DeSantis had no relationship with the duo.

DeSantis won’t say how and when he met Parnas and Fruman or who introduced them. During a brief news conference this week, he declined to say whether he met with Parnas and Fruman after he became governor. He did offer that Parnas sought a role on his transition team that was denied.

That disclosure gave the impression DeSantis and the two men parted ways after the campaign. But the newly discovered pictures at the inauguration show them as privileged guests on the day DeSantis was sworn in.

Invitations to DeSantis’ inauguration on Florida’s old Capitol steps were hard to come by. Just a few hundred guests gathered around the stage as DeSantis took the oath of office and became Florida’s 46th governor.

Shortly after midnight on the day of the festivities, inauguration chief of staff Nicole Rees sent an email to the rest of the team with the subject line: “For reserved seating near the front.”

Neither Simpson nor Sen. Lee had any recollection of Parnas and Fruman at the event. Lee said he came for 15 minutes and couldn’t find a seat, so he and his wife left to watch it on television.

“The inauguration seemed like a logistical mess to me,” said Lee, R-Thonotosassa. “It was very poorly organized.”

Parnas and Fruman also attended a thank you dinner in Miami for DeSantis’ major donors on Jan. 3 attended by about 150 to 180 people.

In a Manhattan federal courtroom on Wednesday, Parnas and Fruman pleaded not guilty to the campaign finance charges and accused the government of a smear campaign.

When pictures surfaced days later showing Parnas and Fruman attended DeSantis’ election night party in Orlando, the governor for the first time directly acknowledged that he knew Parnas, but said, “I didn’t know the other guy as much.”

While DeSantis refuses to give a fuller explanation of how he knows the men, pictures continue to emerge that link them closer together leading up to when DeSantis assumed office.

The Times found images of them hugging shortly after DeSantis declared victory. Earlier this week, Politico reported that Parnas hopped across Florida with DeSantis in the final campaign stretch before the election.