The God of Love had a really bad week

(CNN)Shock is not the right word when I heard the crowd at a Trump rally chanting "send her back." There has been so much shock recently that it is hard to know what to call it anymore.


As the crowd continued to chant, I watched them: They were almost exclusively white, wearing T-shirts and polos, with blonde hair peeking from under MAGA hats. Familiar-looking middle class white people -- like my neighbors, classmates, friends, and family. I assumed most were probably Christians. Trump's "base."
"Where," I blurted out to my husband, "did these people go to Sunday school?"
He stared. "You are worried about Sunday school?"
"Yes. Sunday school," I insisted. "That song -- the one we all learned. Jesus loves everybody." I quoted what may well be the Protestant Sunday school national anthem:


I sang it in Methodist kindergarten, the teacher displaying a picture of children of every color holding hands. "Jesus said we are all equal," she instructed, "God loves everybody and you should, too." It would take me awhile to figure out that the Declaration of Independence was not in the Bible, but it sounded right at the time.

As the chant died down, the rhetoric of division went on with new words from the President's speech. That familiar audience -- mostly white, probably mostly Christian -- continued to howl its approval.

As many have noted, "send her back" is racist, sexist, and un-American. It is also the expression of a certain view of God, one that has slowly shifted the priorities and teaching in far too many American churches, and made it possible for those who would have once sung Jesus Loves the Little Children to join this hostile liturgy. How did they get there? Slowly, perhaps imperceptibly, hymn-by-hymn and sermon-by-sermon, one theological step at a time.

I do not feel shock. I feel grief. I do not recognize this Christianity, even if the faces in the crowd were familiar.

Not all Christians support Donald Trump. The president remains wildly unpopular among Christians who are persons of color. A majority of white Christians continue to approve of him. Of white Christians, according to Pew, evangelical support for Trump hovers around 70%; white mainline Christians are split with 48% approval; and around 44% of white Roman Catholics support him.

These numbers demonstrate the strength of white Christian base, but they also suggest something else: America's white churches are roiled by political division. Although pro-Trump evangelicals are a solid majority, the divides in other white Christian groups are fairly even. Many white Christians are struggling with fractured families and frayed friendships. White clergy friends have reported to me that angry congregants have intimidated them after preaching a political sermon with threats to rescind donations or to have them fired. A recurring feature of progressive Christian Twitter has become white people bemoaning the fact that their relatives and friends have turned away from Jesus' command to love one's neighbor.

White Christianity right now is a dumpster of discord; internecine warfare has not been this bad since the 1920s when controversy ripped American churches apart on whether human beings evolved from monkeys.

In the last three years, Donald Trump has replaced Charles Darwin as troublemaker-in-chief in many white American churches. Scholars have offered sound theories as to the cause of this sharp divide, especially around issues of race and gender. There are excellent books on how white supremacy shaped American Christianity; and equally solid work regarding misogyny in churches, particularly around abortion politics. The media publishes stories about Christian Democrats pushing back against Trump with liberal renderings of faith and politics.

All are helpful. But none seems to get to the heart of the matter: Too many white Christians have a God problem.

I recently mentioned to someone that my brother had not spoken to me since Charlottesville when we argued about white nationalism and racism. My friend asked, "How is that possible? That you and your brother could be so different?"

My brother and I grew up in the same Methodist Sunday school. We were confirmed together in the same Methodist church. Same parents, same school, same church. We sang how Jesus loved all children. We learned Golden Rule -- "Do unto others" -- and the Great Commandment -- "Love God and love your neighbor." Ours was not a scary God threatening sinners with hell. It was the God of the peaceable kingdom.

My brother, as an adult, traded that God for a tougher, stricter one who exercises judgment against all who refuse to bend the knee, a kind of Emperor-God, enthroned in glory. This God has often shown up in Christian history; including in American fundamentalism. But from 1980 onward, he underwent a revival in several strands of American religion including Pentecostalism, neo-Calvinism, traditionalist Roman Catholicism, and some Orthodox communities. He is a masculine Sovereign, and a winner-God for people feeling displaced in a pluralistic world. And after 9/11, this militaristic God became more real.

Meanwhile, the God of Love was not having a particularly good run. In the political age bookended by Ronald Reagan's culture wars and a devastating terrorist attack, the God of Love began to look like a loser, one fit for liberation theologians, do-gooders, and feminists. The churches that still preached a God of Love declined; those seminaries closed.

In 1865, Abraham Lincoln ruminated on how Americans had read the same Bible and prayed to the same God. Poetry aside, Lincoln was wrong. My brother and I read the same Bible and wound up praying to different gods. His God thunders about lawless mobs and unbelievers. Mine is the mysterious Word, present before the beginning of creation, calling all to compassion, and who welcomes little ones.

This was true in Lincoln's day as well. In the 1840s and 1850s, major denominations split over the issue of slavery and a deeper political crisis bound up with different visions of God: the God of the Master versus the God of Love. All theologies might come from the same Bible, but they were not then and are not now equally true.

Even as trends point to the decline of religion, Americans are still living with this theological argument -- one playing out among Christians of mostly European descent. This argument shapes our politics, its dogma chanted as liturgy in Trump rallies and offered up in pulpits across the land. This is an ancient conflict that never quite seems to go away. For whatever reason, western Christianity has a hard time sticking with a God of love.

But, as a minority of white Christians know, and the majority of Christians of color never need be reminded, the God of love is always hanging around, the brown-skinned Jewish rabbi preaching about the poor being blessed and the broken-hearted comforted. Love your neighbor as yourself. Do unto others. Let the little children come. Faith, hope, and love. And the greatest of these is love.

Posts : 1030
Join date : 2017-08-20
I was born and raised an evangelical. I haven't been to church in 20 years now. My husband and I were Southern Baptists, but felt totally stifled when any discussion of our government came up. It had become very obvious that, unless you hated the Clintons, you didn't belong in a Baptist Church in the South anymore.

We walked out the door of the church one day and just never went back.
I will never go back, definitely not now, because when you speak of those White Christians who follow Trump, what you're speaking of is white churchgoers. They're not Christians, and all they do is sully the name of Christianity. The church is no place for Christians to be anymore, quite frankly.

1st John says you know you love the Lord because you love your fellowman. Yes, I can actually quote a whole bunch of scripture, I just don't do it anymore. I don't think much about religion and the older I get the less I think about it. But I am 100% positive that there are no more Christians who are still supporting Donald Trump. They hate their fellowman, and too bad for them, the only way to serve God is to serve their fellowman, even those brown ones. They don't have it in them  and they are not Christians. They're just church people.

I'm pretty sure they would really hate Jesus if he came back to the earth.

I don't like any religions, but I do like philosophies... and Christianity, for the most part, had a really good one. Unfortunately, the right-wing hijacked it and melted it into politics and destroyed it, and then their backing of Trump has annihilated any last hope of integrity it ever had. I feel a little bad for the real practitioners who actually tried to follow Jesus's teachings, because they did mean well, but things are just too corrupted at this point, it's done. And it did it to itself, fouled its own nest.

It's almost funny, how far off the rails they've become. Trump treats immigrants like they're plague, while it clearly states in the Bible that that's one of the last things Jesus would want... and they just clap for that. But Trump says "goddamn" a couple of times in a speech and then they start scolding him. The evangelicals have been having a bit of a crisis about their support of him over the past couple of days because he said "goddamn," but everything else he does? Fine with them!

Them's some fucked up priorities, right there. 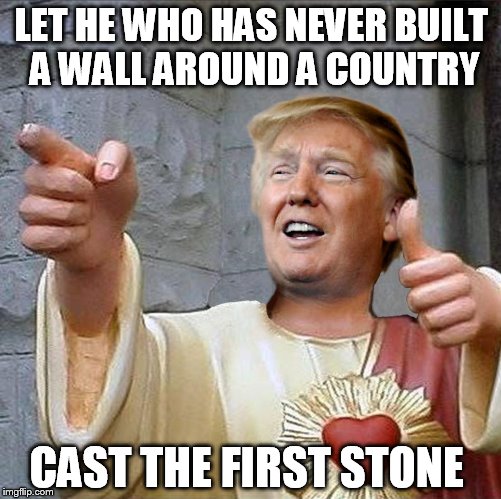 A real possibility! Reminds me of a saying: The good news, Jesus is back. The bad news: Boy is He pissed!

A real possibility! Reminds me of a saying: The good news, Jesus is back. The bad news: Boy is He pissed!

"They say Jesus will find you wherever you go but when He'll come looking for you, they don't know." Warren Zevon 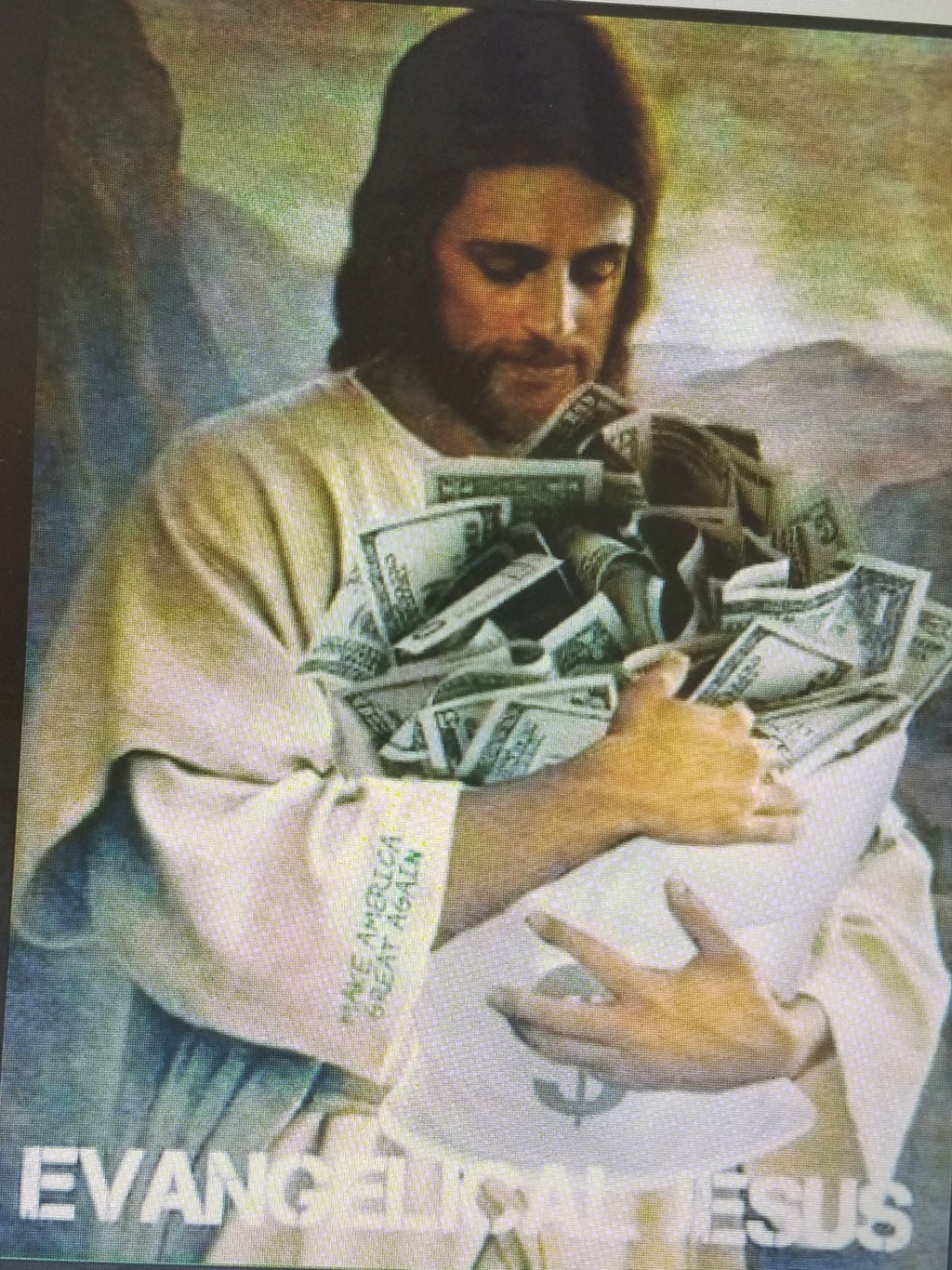 In cash we trust.

Re: The God of Love had a really bad week