The timberwolves played very good team ball with six in double figures as the stars are all taking less points for the team. I still have problems with the wolves defense. Taj and Jimmie cannot by osmosis teach wiggins and towns to play to their potential on defense. It will take all season for those young players to get defense. Thibs system has never failed, and it is bad that they are near the bottom in defense. They went into overtime with Miami, where defense is suspect.

Posts : 36130
Join date : 2012-08-30
The best player on the Cavs is gone. What is left is the usual James getting his stats and the team losing. Horrible defense which has been the truth for four years. 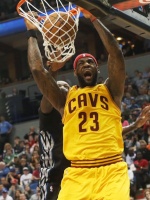 So here is the interesting question: At what point did you say to yourself "Jordan is the GOAT"? Was it after his first three-peat? I think most people said Jordan was the goat after he won his third straight, though I'm curious as to when everyone else came to that conclusion.

Posts : 36130
Join date : 2012-08-30
With me it was simple. About the third time I saw him play live, but what sticks in my mind the most was when the Bulls played Utah in the playoffs. What I saw him in person do on the basketball court I had NEVER seen in my life to that point. I can also say that until probably last year with the new young players, I am finally seeing equivalent play. I saw James play in his second year in the pros and all I saw was the mailman, which was impressive as hell, but it never was close to a OMG. Jordan's persona and play was magical.

James like the mailman will have great stats and a rap that he could never win the big game.

Posts : 36130
Join date : 2012-08-30
James had a great game tonight. His defense was horrible, but he posted up against the DC guards who got no help, and the coach did not adjust. When teams are scoring 130 to 120 nobody is playing defense. Neither of those teams are relevant.

Posts : 36130
Join date : 2012-08-30
Irving had a great second half to beat a very good OK Team. After watching James score fifty plus doing one on one with little team play and then watching the Celtics with Irving playing great team ball, you can see why Irving was glad he can now play winning team ball.

Posts : 36130
Join date : 2012-08-30
Cavs lose again to the lowly Hawks. Wolves appear to be playing well. Knicks have actually become a team fun to watch. If Doug McDermott hits stride and they can spread the floor........could get interesting. Celtics are the real deal and are only going to get better with time. The spurs have been injured but they actually are not playing that bad right now. Ok is simply exciting to watch.

The NBA is really getting to be fun to watch.

Posts : 36130
Join date : 2012-08-30
celtics win nine straight and are one of the top defensive teams in the league. The cavs are one of the worse defensive teams in the league. James put in fifty the other night, and almost gave up that much on defense. Wade is bitching about the starters, but he has not played defense for three years himself. These young players are changing the landscape of the NBA. After a decade of no talent in the East and horrible teams making it to the Eastern finals, it appears that we are going to finally start seeing some talent in the East after a decade of banishment. The West continues to be incredible.

2seaoat wrote:The Pelicans are looking good.  The Cavs still cannot play a lick of defense, and neither rose or Thomas are going to save the day and create something other than the fifth worse defense in the NBA.  They have improved this year from the worse the second half of the season.  It has been comical to talk about the Cavs as even being relevant any more.

Perhaps LaBron's transition next year to another team will be a welcome relief for the Cavs. James is planning ahead.

Posts : 36130
Join date : 2012-08-30
Perhaps LaBron's transition next year to another team will be a welcome relief for the Cavs. James is planning ahead.

His defense is so atrocious and his insistence to play point guard where he simply is not defending would be an absolute curse on any contending team. The simple truth is that you cannot win with James. Now if they warriors put him on their bench, maybe he could get another ring, but the warriors would be diminished by his addition.

But defense really needs to be a team commitment... one leak sinks ships.

Agree. Green, Leonard, Butler, and George are all known for their tough tenacious complete games which means that any team with them on the floor will have a ranked defense. With James playing out of his natural position in his thirties, he loses a step on the first move of a player. Posting up against a big, that step is not so noticeable, but small forwards and guards are easily getting by him and going to the basket or distributing. James because of the way he plays at both ends of the floor is currently a liability to team play. It is alleged that James went to the Cavs to play with Irving. Irving won the title for the cavs. His value is obvious now and last year when I said he was the best player on the Cavs, that was not easily verifiable. This year will prove that he was.

Kyrie was probably altering his D to help compensate.

Posts : 36130
Join date : 2012-08-30
I do not get the Ball kid shoplifting in China. I have heard of three year prison sentences for shoplifting in China. I really do not want to wish ill on a young kid because his dad is a dick, but sometimes a life lesson has consequences and if he gets a slap on the wrist, it will just set up more bad behavior.

Posts : 36130
Join date : 2012-08-30
The Knicks are playing good ball. Doug McDermott was a number nine I believe draft choice who was making progress in his third year, when the bulls decided to dump all the talent and tank for a draft choice, so OK basically got Gibson and McDermott for nothing, Gibson went to the Wolves as a free agent and is kicking asz, and McDermott was traded to the Knicks with Kanter for Anthony where he slowly is becoming a good fit with Hardaway, Kanter, and Porzingis. Doug got 20 points tonight with around twenty minutes of play time.

With Jackson out of there as management, and the coach running an offense which the players enjoy, New York could be a playoff team as their rookie guard is making great strides. After a decade of absolutely historical weakness in the East, we are finally seeing some talent and teams emerging. This is what makes the NBA so much fun. I will be watching the timberwolves and warriors Wed late, and believe this will be a very important game for thibs and the wolves.

Posts : 36130
Join date : 2012-08-30
Warriors beat the wolves like a drum. No defense on the wolves bench as they were only one point down at half, but the bench gave up forty points in the third without KD. I think Curry's defense is ignored because of his great shot, but he did a lock down job on Butler tonight. I was impressed.